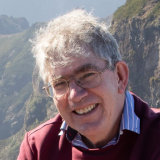 In part 1 of this blog, I gave some background and described some of the challenges I wanted to overcome in the project. In this part, I will describe the platform I built and how it works.

This next variant of the machine is approximately 2 meters tall and is made from oak, with hard point bearing screws and full adjustability. I built it as a ??platform?? I can use to adapt and change and try new things. It’s a good job that I did because there were significant shortcomings, which I corrected later!

More sophisticated machine!
Here is a view of the new machine in its initial configuration. It has a gimbal frame for the camera (bottom platform) and an upper platform suspended from a simple gimbal with a weight that can be moved up and down to change the period. An example image is ??Lin Fold?? ?? a nice fine pattern, with a slow decay but still dominated by precession on the upper platform, which I couldn’t sort out. 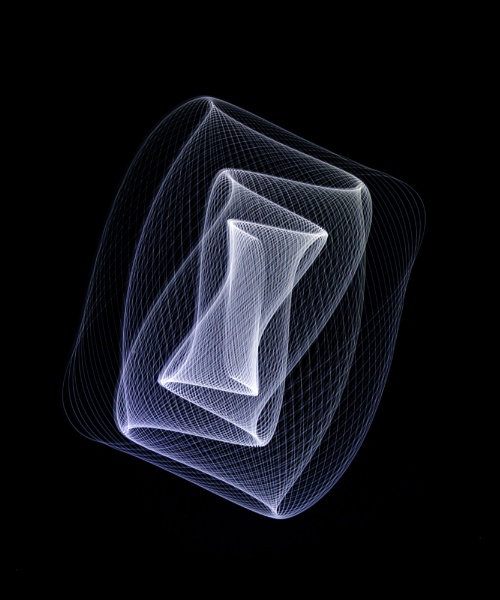 Another ??schoolboy mistake?? (at least it seemed so for an optician) was that camera movement was very inefficient?? it always points to the center of the gimbal frame, what is its center of rotation?? so if the LED was positioned there (which is almost the case in the photo) it doesn’t move at all when you put the camera in oscillation! Corrections were fortunately quite easy; duplicate the gimbal frame for the upper platform, use it for the camera and place the light source on the lower platform.

Now I had a machine that I could control, adjust, experiment with and have fun with! Cooking with gas! It was also quite fascinating to watch. Take a look at the video below:

The upper platform contains the camera and the lower platform the LED light source. Both can oscillate in two dimensions. The period of each can be adjusted by moving the camera or LED platform up and down, with periods of oscillation ranging from over a second to around half a second. Gimbals can also be refined to add or remove ??precession?? by adjusting the suspension screw pairs differentially, which effectively shortens or lengthens the pendulum for a single direction of swing. It is like the multiple strings of a piano for each note; they are not all at exactly the same frequency, which gives depth and color to the tone. However, too much disagreement is not pleasant, and it is the same thing in the harmonigrams! Typical exposure times are 4-5 minutes, although for some images I’ve used up to 30 minutes! In the configuration on the video, the lower platform is extended downwards by additional rods, to increase its period of oscillation.

Adjusting light level, ISO and exposure takes time and experimentation. I find it’s best with a stack of ND filters on the camera, as the LEDs are quite bright; this reduces sensitivity to background light, as exposures can exceed ten minutes. Everything should be set to manual, without IS. Live view is also essential and remote shooting is a real boon. Long exposure noise reduction also works very well, otherwise all the hot pixels show up! The best long exposure results were achieved with additional measures to exclude light from the machine, a cardboard coating! My camera is an EOS R, which works wonderfully in this application. Patience is required, as long exposure noise reduction takes as long as exposure. Any minor jogging, door closing, or earthquake will ruin the capture, and you don’t know what you’ll get until it appears on screen. Sometimes a magic moment. Most of the time ??in the trash??.

The simplest and easiest models are produced when the periods of the two platforms are almost the same; some precession is needed to give the patterns an interesting shape; a minimal degree of detuning can also be appealing, as it slowly spins the pattern. 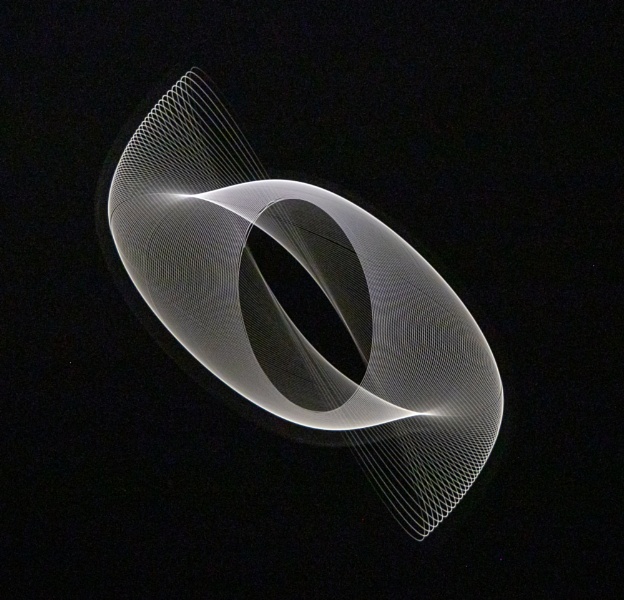 ??Unison??
The musical aspect now becomes very clear ?? the most consistent patterns are produced when the two platforms are tuned close to whole ratios of music, such as a major fifth (3:2), perfect fourth (4:3), minor third (6:5 ). Models become more complex with complex report settings. For example, with a minor third tuning, there will be 11 peaks in the pattern and 5 for a major fifth; adding precession bends the patterns, further increasing complexity. I spent many hours timing swing periods, adjusting and re-timing. For many shapes, the setting should be just right for a few parts out of 1000, so you need patience. Left overnight, the machine will be noticeably out of tune in the morning. 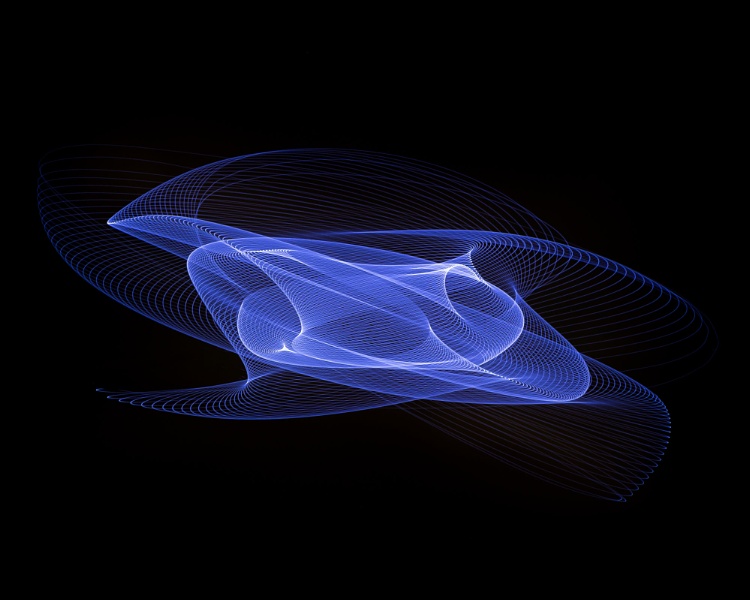 ??Convolution?? ?? tuned close to a major fifth, with a fairly high level of precession. I think it invites the viewer to mentally expand and explore, seeking pathways through the form.

For ??Binding by Light?? the platforms are fine-tuned to a 15:8 ratio, corresponding to a major 7th. The pattern repeats 23 times moving around the shape giving the starburst effect. It seems evocative of something that is bound together in an endless ball of light, hence the title. I gradually reduced the LED current throughout the several minute exposure time, giving the complex glow from the center of the image, without burnout. I’m still taken aback when I look at this image, with its complexity, precision and symmetry. this is gorgeous as an A2 print! 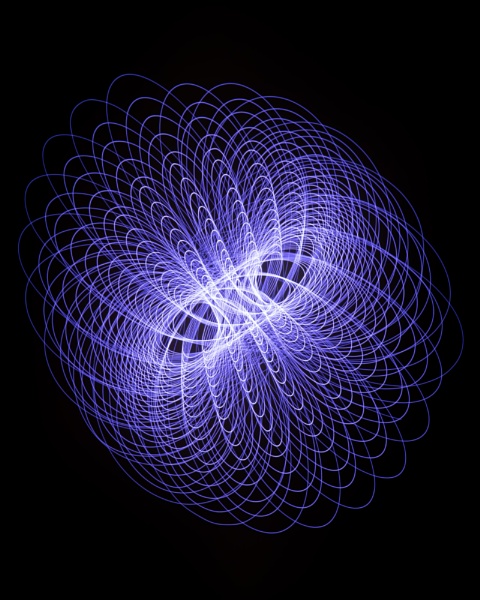 “Blinded by the Light”
When the two platforms are tuned within an octave of each other (2:1), patterns can be surprisingly beautiful and intricate. That was about the adjustment limit on the machine. Any increase would require a large hole in the ceiling (I pleaded for this, but had to try to find other more acceptable ways??)! 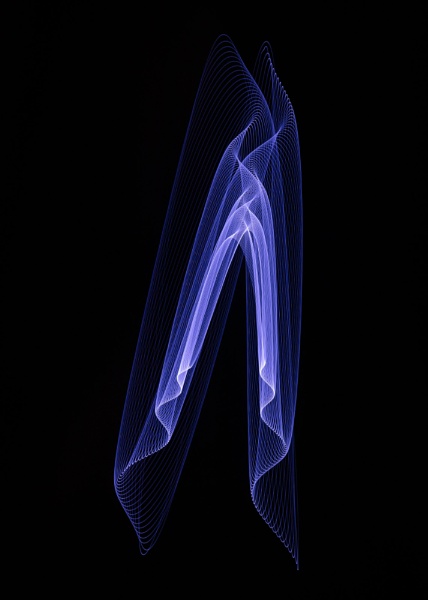 ??Entwined?? – this image was taken near an octave chord, with enough precession to give the linen bend in the tails of the shape. To me, it conjured up two futuristic, intertwined forms or beings, or perhaps a creature from the deep seas of the Abyss.

Producing models like this, I think, accelerated my efforts to move from ??Technology?? just a little further towards ??Art?? ?? but it’s up to you to judge! Prior to this, I wanted the patterns to look perfect with no edge clipping or skipping, no noise, and no highlight saturation (i.e. technology driven). Once I had control of the machine, I was able to start composing, trying to make the images tell a story or become more artistic or ethereal. More on this in part 3! You can see many more of my images on my Smug Mug Gallery here. I hope you enjoy these blog posts – feel free to leave comments, thoughts, requests, suggestions!

When your child is prodigal