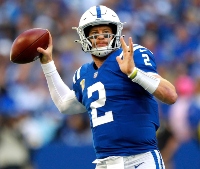 Another quarterback comes off the board – JoeBucsFan.com

Another quarterback comes off the board

The quality starter goes to NFC.

Last week, Bucs officials at the NFL Scouting Combine were very disappointed that there were opportunities in the trade market for quarterbacks.

Indianapolis picked up a pair of third-round picks for Wentz, one of which could become a second-round pick, and they didn’t have to eat his $20 million-plus salary. Washington gets a guy who had a winning record last season and is under contract for three more years.

The Bucs fly their Kyle Trask flag as they negotiate the return of Blaine Gabbert.

Joe absolutely wouldn’t have wanted to give up so much for Wentz, but Joe understands that part of Wentz’s value is the fact that he’s under contract and his value cap is higher because of it.

It’s unclear whether the Bucs will make a significant move at quarterback, though Joe is bracing for Teddy Bridgewater to come to Tampa as a cheap free agent — if he doesn’t land in Indianapolis.

Joe sees 49ers QB Jimmy Garoppolo as a good fit for Indianapolis. They wouldn’t need Jimmy GQ to spray balls down the field on their first attack – as it would take to succeed with Bucco Bruce Arians.