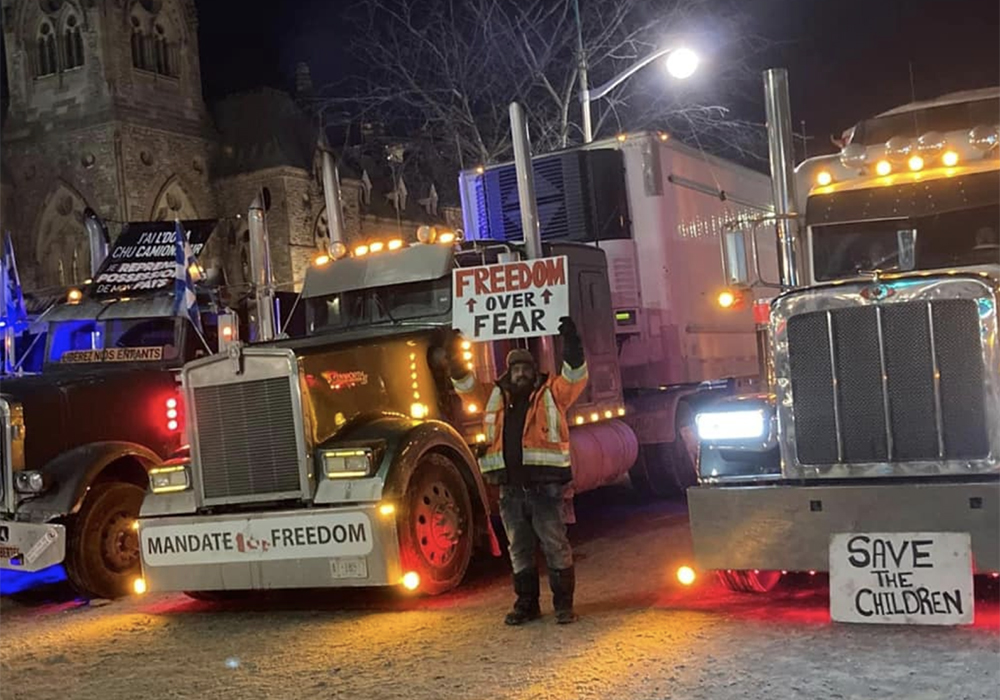 BLOG: Trucker Unrest Is the Result of Misguided Public Policy

Vaccination mandates affecting the trucking industry naturally elicited a determined and outraged response from a number of truckers and rural residents in Western Canada.

A portion of Canada’s commercial truckers who drive large trucks oppose federal rules that limit their mobility, as well as their ability to earn a living.

Likewise, many farmers and rural residents in the West have little tolerance for federal vaccine rules that restrict trade and infringe on individual freedoms.

Personal beliefs aside, there is no doubt that placing obstacles in the way of the Canadian trucking industry will exacerbate Canada’s inflation rate – already the highest in 30 years – and contribute to the persistent supply chain problems that have already affected almost every sector of the Canadian economy.

It was a central theme in an email sent by members of the Conservative shadow cabinet to federal Transport Minister Omar Alghabra on Jan. 21, about a week before a convoy of frustrated truckers arrived in the nation’s capital.

“Throughout the COVID-19 pandemic, truckers have rightly been heralded as the unsung heroes, keeping our supply chains running,” reads the January 21 letter, co-signed by the MP. from Prince Albert Randy Hoback, Conservative Critic for International Trade and Procurement. chain resilience.

“At the start of the pandemic, the Liberal government rightly viewed the trucking industry as an essential service. Yet, in the midst of the same pandemic, your government has now targeted the industry and is forcing thousands of truckers off the road.

It is estimated that between 8,000 and 16,000 trucks could be forced off the road due to vaccination mandates affecting international road traffic. The United States has similar mandates in place, so American truck traffic traveling north to Canada will be affected, as well as Canadian long-haul traffic traveling to the United States and carrying American goods. to Canada.

According to Sylvain Charlebois, a renowned Canadian expert on food supply chain issues in Canada, the cost of US freight by truck from Florida to Canada has increased by 25-100% in the last month, depending on the destination.

Further reducing the flow of goods between Canadian provinces will have adverse economic consequences.

Charlebois promoted this argument in a Jan. 27 opinion piece published by the Western Producer.

His article can be viewed online here.

No one should be surprised that pouring oil on an already fractured Canadian population has the potential to inflame public opinion.

Unraveling the factors underlying the chaos in Ottawa and Coutts, Alberta is undoubtedly a complicated undertaking.

The COVID-19 pandemic has revealed deep divisions within our population – divisions based on partisan politics, urban versus rural values, religious beliefs, fear and concerns about the capacity of a health system. underfunded public to manage spikes in hospitalizations and intensive care. admissions to the care unit.

The impact on hard-working healthcare professionals in Canada must also be considered.

And while most Canadians still believe that vaccinations are the best way to control the spread and impact of COVID-19, the issue of trucking restrictions raises important questions that should be considered by all policy makers. .

For starters, could Ottawa have done anything to prevent disruptive protests in Ottawa and Alberta?

Do unvaccinated long-haul truckers who spend hours and hours alone in their trucks really pose a significant risk to our society?

And perhaps most importantly, if the fallout from trucker protests – present and future – includes civil disobedience, confrontation and violence, then who should bear responsibility for those results?

One hundred percent compliance with any policy is not a realistic expectation, especially when the policy addresses such a complex and politically charged issue as mandatory vaccinations.

Laws prohibiting illicit drug use certainly do not achieve 100% compliance. Nor do the laws and regulations prohibiting tax evasion via offshore tax havens, for example.

In this context, how far should the government be prepared to go to achieve 100% compliance with mandatory vaccination?

This is a crucial question.

After two years of not containing a rapidly mutating virus and disrupting almost every aspect of Canadian life, perhaps it is time for Liberal leaders in Ottawa to ask themselves: when will the risks associated with the policies of compulsory vaccination outweigh the perceived rewards?

There is no denying that the policies of the Liberal government have pushed an otherwise productive and law-abiding segment of the Canadian population to the point of outright resistance.

The failure of political leaders to engage in meaningful dialogue with their citizens – especially those who feel economically, politically or culturally marginalized – often has both ugly and predictable consequences.

This should be abundantly clear to Ottawa, as it continues to offer financial reparations for the misguided policy decisions of Canada’s past.

With respect to the trucker protests, one can only conclude that the current federal government is completely out of touch with a segment of the western Canadian population that it was elected to govern.

Either that or he willfully ignores the values ​​of a section of the Canadian electorate that he considers politically insignificant.

Either way, all Canadians, Liberals and otherwise, will be faced with a mess that should rightly have been avoided.

PROGRESS AND POVERTY | The daily blog

RAPTORS BLOG: Tribute to Fred VanVleet for a well-deserved nod to the stars