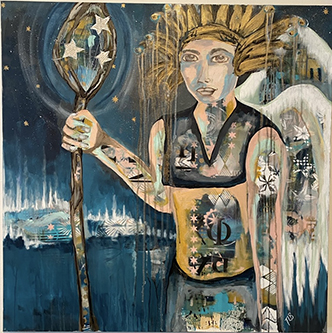 “Cue the music”…the circus calliope plays in the background.

I “walk on a wire, on a wire, the show must go on!” “Entrance of the Gladiators” by composer Julius Fucik, written in 1897, provides the circus walk leading to the introduction to 3 Dog Night’s 1974 hit, “The Show Must Go On.” Ladies and gentlemen, boys and girls, turn your attention to the central arena as this blog highlights some of the best art exhibits of the year.

The West Shore art scene has won accolades from galleries from Mechanicsburg to Carlisle, and even York, for half a dozen of the best with enough fanfare to fill the marquee or at least the galleries in which they have been featured.

Artwork by Tina Berrier for “Tangled Up in Blue”

Starting with Metropolis CollectiveThe two shows of the year from gallery director Hannah Dobek and owner Richard Reilly celebrated their 10th anniversary with two blockbusters. Winter’s “Tangled Up in Blue” and Summer’s “Habitat, Environmental Reflections” proved that Metropolis, once seen as an offbeat alternative gallery, still retains its forward-thinking approach to art and design. music, but its popularity today draws crowds from all over. . “Blue” was dramatized, detailed, and delivered throughout the spacious gallery with great foresight and deliberation on the part of the skillful and confident Dobek. Gathered by his intuitive and instinctive vision, the exhibition tour was not only insightful but thought-provoking and provided a direct narrative of how an exhibition with a compelling theme should unfold. Painting the East Coast, Dobek gathered a cavalcade of creatives, capturing the blue vibe as well as the color. A blue moon showed up for opening night to reveal a party atmosphere that featured poet/singer Donna Jean Foster as the musical accompaniment on stage. Among the artists featured were Paul Nagle, one of the seven animated artists, as well as Emily Paige, Alexis Manduke, Jude Screnzi, Jamison Eckert, Nina Rubin Mantione and Ms. Dobek. 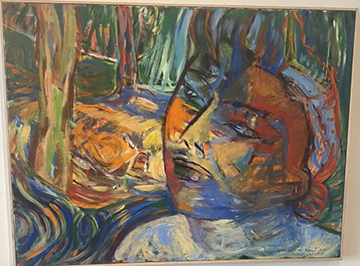 Work by Joanne Landis for “Habitat”

As the calendar moved into its second half, Metropolis opened July with a bang. “Habitat” and its works argued that, even with all of our differences, humanity is still connected by caring for each other and the inherent condition we share as humans. Sometimes detached by the earth and the space in a way, we maintain a community of life. Local artists included the highly respected Joanne Landis, Matthew Ziegler and Bonnie Lorey, as well as Mantione and Dobek. Beyond the Zone, a diverse list revealed that Sean Matthews, Amy Asher and Hailey Patrick, as well as Screnzi and Eckert, have made new contributions to Habitat. The Metropolis sequel will wait until 2023, as “Wintry Mix 7” will be edited in early winter. 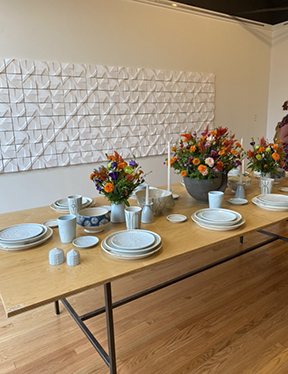 Ceramic artists Kirsten Olson, Janelle Hoch and Amy LeFever for “At the Table”

Carlisle Arts Learning Center the gallery’s director, Cathy Stone, recently became its executive director. In 2022, she created consecutive stellar exhibitions with “At the Table”, associated with “In Full Chroma”. The two shows in one proved that Stone was a maestro at orchestrating dramatic pairings. “At the Table” featured a trio of skilled artisans who are also close friends. They have raised the bar by setting the table for the holiday season with exquisite, hand-forged and turned pottery, elevating tableware to a new gold standard. Their collective efforts graced the GB Stuart Gallery, worthy of the royal crowds of spectators who turned out in droves to see CALC transformed “into a dining experience born in a mansion”. Three compatriots, Kirsten Olson, Amy LeFever and Janelle Hoch, all bring different but complementary skills to their ceramic creations. Of the trio, Ms. LeFever provided the backdrop/decor with three-dimensional bas-relief wall installations. Each piece is the same design, but it is their placement that uniquely presents the whole. Ingeniously matched, they become a modern model for a timeless tradition. Kirsten Olson’s love and appreciation for images and stories of the Far North is reflected in her utilitarian vases, vessels and tableware. They contain more than food and drink as their beauty reflects a pure sense of community and culture. Janelle Hoch completes the trio’s “At the table” exhibition with her turned porcelain, favoring sharing meals with friends and family as a favorite pastime. Janelle hand sculpts her graceful forms with dramatic patterns. What placed the exhibit above the bar was a visual tour de force, transporting viewers to an atmosphere of intimate dining down to the smallest detail. To balance the ground floor gallery, three painters claimed attention upstairs “In Full Chroma”. Jonathan Frazier, one of seven animated artists, showcased New Orleans shotgun shacks in understated tones suited to the French Quarter vibe. Geoffrey Thulin’s dramatically detailed watercolors and gouache portray a sense of urgency, bringing energy to the surface of the canvas. Rounding out the group is Thom Kulp, an abstract practitioner of pattern and design with his geometric progressions completing the equation. Block printing, mandala drawing and collage are all part of her repertoire. Collectively, their use of vibrant colors draws you into a kaleidoscope of magical possibilities. 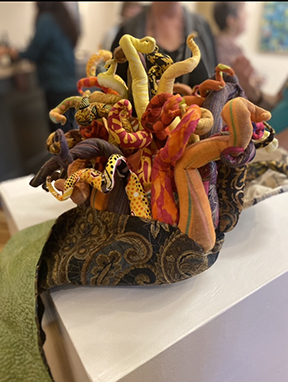 To kick off fall, Peg Belcastro and Gail Walden Coleman ruled downstairs with their dueling explosions of color in their “Heartscapes and Landscapes” exhibit. As Coleman proudly wears his art on his sleeve, painting from a deeply emotional perspective propels his abstract ideas leading to canvases that are both creative and intricate. Belcastro inhabits his landscape paintings with a bravery of bright, bold colors. Upstairs, “unCommon Threads” broke new ground with the abundant expanse of textile art, demonstrating emphatically tough bravery put forth by 30 artists, each an expert in their respective medium. Visionary local artisan, Joh Ricci of the Fairfield Valley, won ‘Best of Show’ honors with his mind-blowing designs that are both eclectic and very colorful. Another local flavor for the most innovative use of the material honored Rebecca Fox of Carlisle. 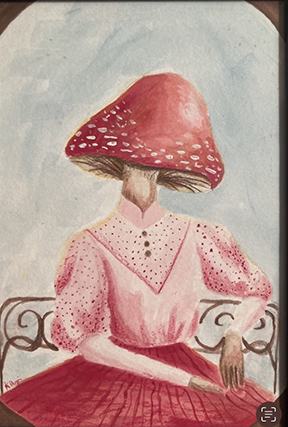 From “Mycotopia” to Hive artspace

York came all roses for HIVE artspace. Gallery owner Susan Scofield, throughout the year, puts the White Rose City on the map of the art scene. Susan creates ‘new beginnings’ associated with white roses through a new thematic exhibition changing monthly, regularly bringing visitors to the doors of her intimate gallery. Imagine a hobbit’s hovel as Hive artspace proves time and time again that great things come out of small neighborhoods. Two standout shows from a list of 12 to choose from were “Shades of Green” in March and “Mycotopia” in August, which captured our full attention with artists from yesteryear submitting work from their East Coast swing. A talented who’s who included local favorites Tina Berrier, Tara Poe, Heather Greenough, Julian Langeheine, Kate Durgin, Savannah Schroll Guz, Jen Simon and Kelly Nevin. In March, men “wearing green” called on Jim Hively, Mark Broomell, Andrew Smith, Michael Hower, Charlie Hubberd and Lex Rickabaugh who together brought home a lucky charm for shoppers to take home. Susan Scofield, time and time again, takes on the task of Hercules out of sheer force of will, putting on a dozen new shows each year and selling an incredible amount of artwork from each. Over a year, it adds to the value of a gallery’s art.

Seeing these shows firsthand with the glamor and excitement of opening night was well worth the price of admission, except all were free to view. In other words, whether it’s circus lexicon or Mastercard… experience: invaluable.

November dates to note: “Art and Motherhood” at CALC until December 3 is a solo exhibition of the artistic talent of Pamela J. Black and her “assistants”.

Most photos courtesy of Jana MacGinnes

If you like what we do, support our work. Become a friend of TheBurg!