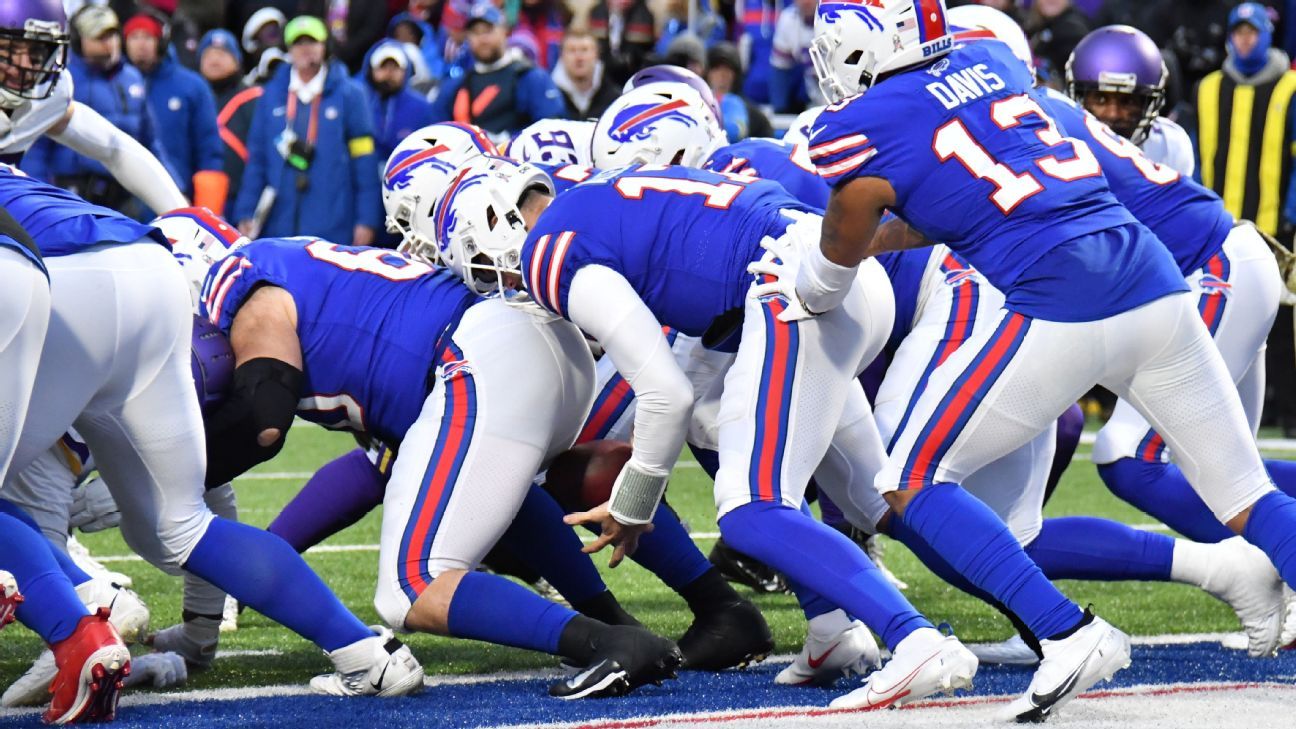 ORCHARD PARK, NY — Josh Allen walked across the field with his hands on his head almost in disbelief. As the Minnesota Vikings celebrated their 33-30 overtime win, Allen threw his helmet to the ground — not the first time the quarterback had done so in frustration on Sunday.

The rollercoaster loss stemmed from what has become a trend for the Bills since the team left in Week 7: poor second-half play. The offense hasn’t scored a touchdown in the last two quarters or in overtime since the Bills rallied to beat the Kansas City Chiefs in Week 6.

While it’s not the time to panic just yet, the Bills are 1-2 in their three games since the bye. They lost the conference lead and fell to third in the division and saw the games they controlled become closer than they should be. Buffalo is now 2-3 in single-scoring games this season.

The Bills have lost back-to-back games in which they had double-digit leads for the first time since 2010. They’re not playing in a disciplined fashion, with 14 of their 16 penalties in the last three games coming in the second half or in extension. .

“It’s just about executing when the times and the stakes are highest,” center Mitch Morse said. “…We have a lot to learn and a lot to improve, which is a double-edged sword.”

Allen’s turnovers played a role. The quarterback fumbled eight times, lost three and threw 10 interceptions, which leads the NFL. Six of those have come since the team left in Week 7 (two in each game), and five have come in the second half or overtime.

“It comes down to my shoulders and my shoulders only,” Allen said. “Making the right decisions, making the right throws, doing our best in practice. This one will suck to watch. The only way is to move forward. We have to find a way to put that behind and not let it affect our fellow man.

While Allen’s three turnovers in the fourth quarter and overtime played a significant role in the Bills’ latest loss, first-year offensive coordinator Ken Dorsey’s decisions or unwillingness to head the ball in the second half, despite the fact that McDermott said the team needed to be less one-dimensional, left time on the clock for opponents. The offense has carried the ball 33 times (only 21 times by offensive players) in the second half of the last three games (ranked 20th), despite leading at halftime in every game.

The red zone offense was also a problem. The team’s four drives in the red zone in the second half or overtime of the last three games have not resulted in touchdowns. Allen has thrown interceptions in the red zone the past two games (three total). He had thrown two in his career before Week 8.

“It seemed like when we had to get into the rhythm, it was always the critical moment,” wide receiver Stefan Diggs said. “And we still manage to figure it out and work our way through, but it will save us if we don’t take this lull, take this little breath of air. By [Miller] always says not to blink, and I feel like we could blink a bit.

The defense also failed, especially in the running game. The Vikings’ 17-point comeback down started earlier with an 81-yard touchdown run from running back Dalvin Cooklongest scrimmage touchdown allowed by the Bills under McDermott (since 2017).

As the bills got bumped – security Jordan Poyer missed last two games, linebackers matt milano and Tremaine Edmunds have each spent time with injuries and a cornerback Tre’Davious White has been a healthy scratch in the last two games – that doesn’t explain all the problems.

As of Week 8, the Bills defense is giving up 120.3 rushing yards per game in the second half/overtime, which ranks 31st. The defense is also giving up 6.2 yards per play during that span (24th).

Bills will have to figure that out quickly. The Cleveland Browns and the running back Nick Chubb (third in the NFL with 904 rushing yards) then arrive in town.

Today’s best deals on the best gifts of the Christmas season, toy and PS5 restocks and more