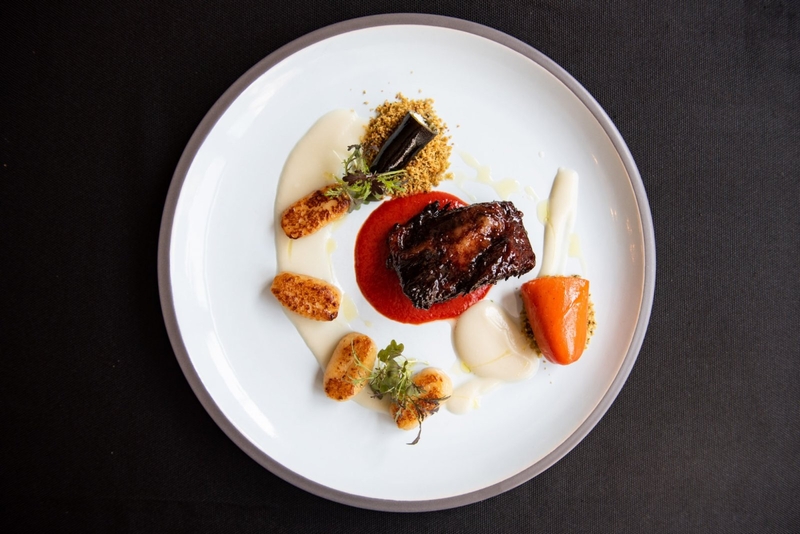 Challenge: visit all of Lithuania’s best restaurants in one week

The Good Food Academy of Lithuania recently named the top 30 restaurants in the country and challenged tourists to visit them all in one week. Challenge accepted.

Although Covid-19 has hampered many travel plans, we hope that our travel content can continue to inspire you for your future trips. So when that passes, you will be ready to return to the world..

Lithuania may not traditionally be known for its food, but the country is experiencing a food revolution, with young chefs updating old-school methods with produce from their own backyard.

The country’s best restaurants serve everything from fresh food cepelinai (Lithuanian national dish: potato and meat dumplings) to the gastronomic reinventions of the always popular cold beetroot soup, altibarščiai. We asked Linas Petrukaitas, CEO of the Good Food Academy, how to visit the top 30 restaurants during a week-long stay. Read on for his itinerary.

Start in Vilnius at Stebuklai, the former number one on Lithuania’s 30 best list, for the capital’s most popular breakfast. Favorites here include Eggs Benedict, Huevos Rancheros or ricotta cheese pancakes topped with caviar. Much forgiving?

Then take Gediminas Avenue towards the Cathedral and stop at Dine for an octopus lunch with potatoes and homemade duck sausage.

In the evening, everything revolves around the Stikliai, a gourmet restaurant in the sumptuous hotel of the same name, which has welcomed everyone from celebrities to kings. Chef Gerdvilas Žalys has perfected his craft under the guidance of Joël Robuchon and while you can dine a la carte, he really gets creative with the six-course tasting menu. French techniques are applied to Lithuanian ingredients: think smoked trout soup, or venison loin with caramelized onion and juniper seed oil.

End your evening at Sofa de Pancho with late night margaritas and ceviche, quesadilla and guacamole (if you can crack it).

Start your day exploring the Old Town with champagne at Telegrafas Kempinsky. Grab a table by the window to savor a continental breakfast, fresh bread and a glass of champagne, while taking in stunning views of Cathedral Square.

For a well-watered lunch, you can’t beat Saint Germain’s wine list, which offers 25 varieties by the glass. Soak up fine French-inspired dishes (we love lamb chops with fresh figs and olives) before heading to Ertlio namas, where you’ll nibble on appetizers.

Traditional Lithuanian cuisine reigns supreme here: try the venison pâté sprinkled with black salsify, or the pheasant with Jerusalem artichokes. The menu changes every two months, with the chef deliberately eschewing Soviet-era ingredients like pork, beets, and potatoes in favor of flavors that reflect the city’s gastronomic history.

Tonight, dine at the best official restaurant in town. Dziaugsmas has been at the top of the Top 30 Lithuanians list for two consecutive years and for good reason: Chef Martynas is one of the top ranked chefs in the country. The emphasis here is on Lithuanian ingredients sourced from local farmers who are personally known to the chef and built into beautiful, shareable dishes consisting of cod fritters, toast, and prime rib, paired with natural wines.

Exit Vilnius to the medieval town of Trakai, 30 minutes away, and start with brunch at Apvalaus Stalo Klubas for the best views of Trakai Island Castle in the middle of the lake. The dishes here offer a fresh take on Lithuanian classics: a version stuffed with venison cepelinai (potato dumplings), Lithuanian national dish, or local baked cheese with caraway seeds, pumpkin gratin and potatoes.

After a few hours of exploring the city, grab a late lunch at La Esperanza – a classic French dining room inspired by herbs and vegetables from the kitchen garden. Make way for dessert, which is best enjoyed on the open-air terrace, surrounded by pine trees. Then it’s time to head back to Vilnius, where you can taste European dishes with a taste of India at Gaspar. Chef Gaspar Fernandes’ culinary creations are inspired by recipes handed down from generation to generation in his family, such as his mother’s curry with chicken or giant shrimp, full of exotic Indian spices. Don’t overeat, as you’ll make an overnight stop at zero waste restaurant Amandus for a Scandinavian-inspired tasting dinner, prepared by up-and-coming chef Deivydas Praspaliauskas.

Can you face a final stop? End the night at SOMM, considered to be Lithuania’s best wine bar, with some of the country’s most knowledgeable sommeliers. The local terroir and tradition create notes that are not often found in southern European wines. Wild berries and apples create strong Nordic flavors, like Voruta brand rosé, which is made with strawberries.

After all that wine, you’ll want to sleep. Start the day with a lazy cappuccino at Da Antonio, one of Vilnius’ oldest restaurants and the only a la carte Italian restaurant to make the top 30. It’s easy to see why. Chef Dmitrij Babenko combines imported Italian specialties with local produce to create innovative mashups, like burrata with shrimp ceviche and guacamole.

At lunchtime, it’s time to taste the best beef in Vilnius. Choose between Meat or Böff, both within walking distance of the Old Town. The aptly named Meat specializes in dry-aged Lithuanian beef and boasts the largest meat cooler in the Baltics, with all beef ripened for at least 28 days. Böff buys his USDA certified beef from Creekstone Farm in Omaha. Their bulls are fed a grain-based diet for at least the last 120 days (which might explain why filet mignon tastes so Well).

After walking through the cobbled streets of the Old Town, head to Sweet Root, where the menu features Lithuanian seasonal produce dictated by local nature and weather conditions. Think juicy tomatoes, hot pink beets and crispy cucumber in the summer, porcini mushrooms and earthy potatoes in the fall and winter.

For late-night snacks and drinks, Selfish offers some of the most affordable fish and seafood in town. Try the popular tuna tataki – a lightly seared fish with a citrus sauce – or Thai-style mussels in coconut broth. If you can take it, head to Vilnius Street and Islandijos Street to enjoy the nightlife.

Roadtrip: from Vilnius to Kaunas

On the way to the coast, stop at Kaunas, Lithuania’s second largest city and another culinary hotspot.

Dia comes highly recommended for lunch, where a global menu includes Italian truffle dumplings and Thai red duck curry. Or head to Momo Grill, in a historic building by the river. Despite the name, you won’t find Tibetan dumplings on the menu here. Instead, you get legendary charcoal-grilled meats, including homemade Lithuanian sausages or Brazilian beef tenderloin.

Otherwise, go for Nüman – a restaurant that prides itself on its ever-changing menu. The chef’s constant search for new products, suppliers and techniques means that he never repeats a dish on the menu. Delights of the past included mackerel with dried dill ice cream and locally sourced whole duck for two, expertly carved at your table.

The bustling resort town of Palanga is always packed, so be sure to book a table (and room) for your night out at Vila Komoda well in advance.

It’s a four hour drive, so stop for lunch at Avenue Brasserie in Šiauliai. It is the first restaurant in the city to be included in the list of the 30 best in Lithuania. Enjoy duck breast with pear purée and chicory or try braised octopus with potatoes and cauliflower.

Then, direction Palanga. The chef of Restaurant Palanga offers a French menu with absolute precision – the duck soup with porcini mushrooms is a hit, while diners have described the tirimasu as “legendary”. Some regulars have returned after more than a decade for just another taste.

At nightfall, installation in the restaurant of Vila Komoda. Chef Martyn Meid’s experimental style and obsession with natural flavors make the tasting menu a sensory overload. Make sure to try the homemade rye bread, which is handmade from a century-old recipe. Then soak up your bed in the upstairs rooms of the historic building, once the residence of Lithuanian nobility.

It’s not a Sunday without brunch, and the family-run Monai is your best choice in Klaipeda. Whet your appetite as you stroll through the charming old town, with its cobbled streets and quaint half-timbered buildings, before savoring the constantly changing home-made menu. Linger over a tuna tartare and a environment (mead) aperitif, a sweet honey liqueur dating back to the 11e century.

Drive to Šturmai for an early dinner at Šturmų švyturys. Owners Česlovas and Asta Žemaitis have created a magical space on the shores of the Curonian Lagoon where you can lazily watch the fishing boats stream into the harbor, or dine on the cozy terrace as the sun sets over the Coronian Spire , a sand dune peninsula that stretches as far as Russia.

Select your own fish from the ice cream counter – the choice varies depending on the season and what was brought from the boats that day, but often includes pike or perch – which is then baked in a wood-fired oven. This is a great opportunity to discover what is caught locally, as well as the products fodder in the surrounding forests: porcini mushrooms, nettles and beets.

The return trip to Vilnius takes around four hours, so it would be rude not to stop at Monte Pacis for refreshments and the chance to see the Baroque architecture of the Pazaislis Monastery. Too drunk to continue? Spend the night here before returning to the capital.

Do you think you have the stomach for a Lithuanian culinary odyssey? You know what to do.

Note: Nineteen18 and 14Horses are closed due to a move.