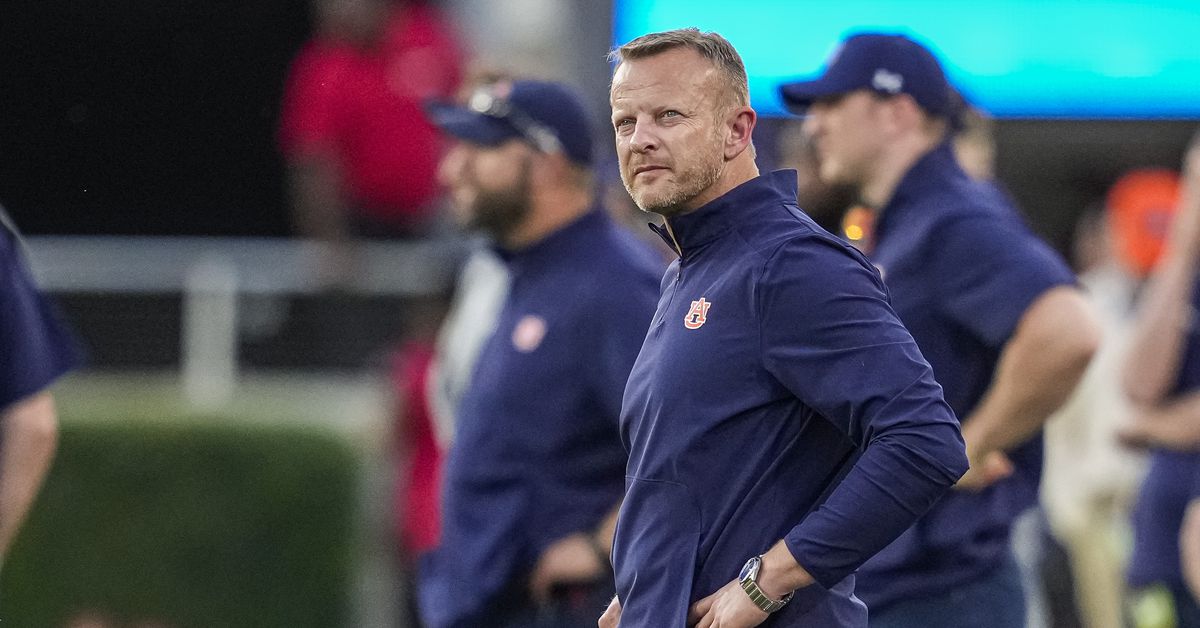 Things are looking good for Lane Kiffin here at Ole Miss as the Rebels are undefeated and ranked in the top 10. The same can’t be said for Bryan Harsin at Auburn, in what many are saying this will likely be his last game at bar. .

Our friends at College and Magnolia were kind enough to answer some of our serious and less serious questions as the Rebs take on the Tigers tomorrow at 11 a.m. at Vaught Hemingway Stadium.

1. Rank the following candidates to be Auburn’s next head coach: Urban Meyer, Matt Rhule, Hugh Freeze and give a wild card candidate.

Man, if you want me to rank these three, then I have to say…

1. Wild Card Candidate (basically the field): Jeff Grimes, OC at Baylor. The former OL coach at Auburn, drafted into the 2013 AU offensive line and 2019 LSU offensive line, has been pretty solid with his offense at BYU and now Baylor, and he knows what he’s dealing with at Auburn.

3. Hugh Freeze, just because I think some of our money people are dumb enough to want him, and he advertises himself.

4. Urban Meyer, would be too expensive, PR would be terrible and we’re not going to help ourselves in that area leading to a hire anyway.

Auburn wins if Ole Miss literally spits the ball out 5 times at his own 30. Our offense has scored just one second half touchdown since last year playing P5 opponents, and we’re getting noticeably worse as we go. the game progresses. Our defense will get tired of carrying the whole team, and we will have a few minimum turnovers ourselves. In fact, make Ole Miss fumble on her side of the court 7 times to make up for our turnovers.

3. What is the general feeling around the Auburn fan base about how this season has gone?

WRONG. I’m sure you could find fans saying “awwwww, give Harsin the time he needs”, but they’re probably baby boomers who got a pension working at the widget factory in 1968 and who have never held any other job. Harsin never endeared himself to the Auburns, but his height probably beat Ole Miss last year, as Auburn still controlled its own destiny at that time. People don’t really trust the powers that be to make the right decision because everything has gone wrong, from Harsin’s potential dismissal in February to waiting for kick-off week to get rid of Allen Greene. The staff aren’t recruiting at the moment because they know they’re going to be made redundant very soon, and we’re all waiting for the Sunday morning flash from Pete Thamel that it’s finally happened.

4. Where has Auburn Jesus been this season when he’s needed more than ever?

Auburn Jesus works in mysterious ways. He gives us clear signs to fire this guy, and just like many people in the Bible, our people ignore those signs. We saw a lot more pressing time for AJ though. Everyone pretty much views this year as a punt because of the Potato Pals, and we’re hoping to keep our good Auburn Jesus mojo going for March.

5. Assuming TJ Finley doesn’t return, tell us more about Ashford and what to expect when he’s under centre.

He’s extremely talented physically, but he still lacks some of the key elements to be a top SEC quarterback. He’s speeding everything up and his accuracy is suspect (he was 13-38 against Georgia). He inherited Bo Nix’s best trait of bailing out even before protection breaks down because he’s so temperamental after playing behind our line. However, he can run the ball very well and he has a surprisingly good deep ball. We just don’t put him in a position to succeed with the offensive scheme, and it’s a failure for the head coach, the offensive coordinator and everyone around him.

6. What is the team’s most encouraging unit and where is the greatest difficulty?

The most encouraging unit is our defensive line. Derick Hall, Colby Wooden, Jayson Jones, Marcus Harris, Marcus Bragg, Eku Leota (when he was healthy)… these guys deserve to have an attack on the other side without having them play from behind and for if long time. Hall and Wooden will likely be first-round picks, and they’ve been good for a few years now. We knew they would be a strong unit heading into the year.

The biggest struggle is in front of them. Our offensive line is catastrophic. I don’t know if you’ve seen some of the clips from the Georgia game, but it wasn’t even beaten or talented. Our linemen weren’t even engaging with UGA defensemen. They were just falling, letting the free rushers pass, it was bad. Offensive line play is the main culprit for why we’ve been so bad, and while it’s on Gus and his lack of recruiting from 2017 to 2020, Harsin had plenty of time and opportunities with transfer portal to fix it and it finished nothing. Tank Bigsby and Jarquez Hunter should be one of the best backstop duos in the league, but there’s nothing they can do there. For example, Tank had 62 rushing yards after contact against Missouri and 44 total rushing yards. What is this mess.

7. Are the Tigers crazy in the Iron Bowl this year?

No, and honestly, I don’t want us to do that unless we fire Harsin anyway. Best case scenario, we can this dude after Lane puts up a 50 burger, then acting coach and beloved alum Zac Etheridge leads us to the upset of the century in Tuscaloosa. That won’t happen, however, we’ll probably lose to WKU.

8. Is there anything Harsin can do to save his job beyond this season?

If possible, he needs to blast Ole Miss to start and then win, including a victory over Bama in Tuscaloosa. I don’t think he gets the chance, and win or lose this weekend, he’s going to get fired. We have the week off coming up on the 22nd, and it’s the perfect time to bring him out and let the temp figure things out.