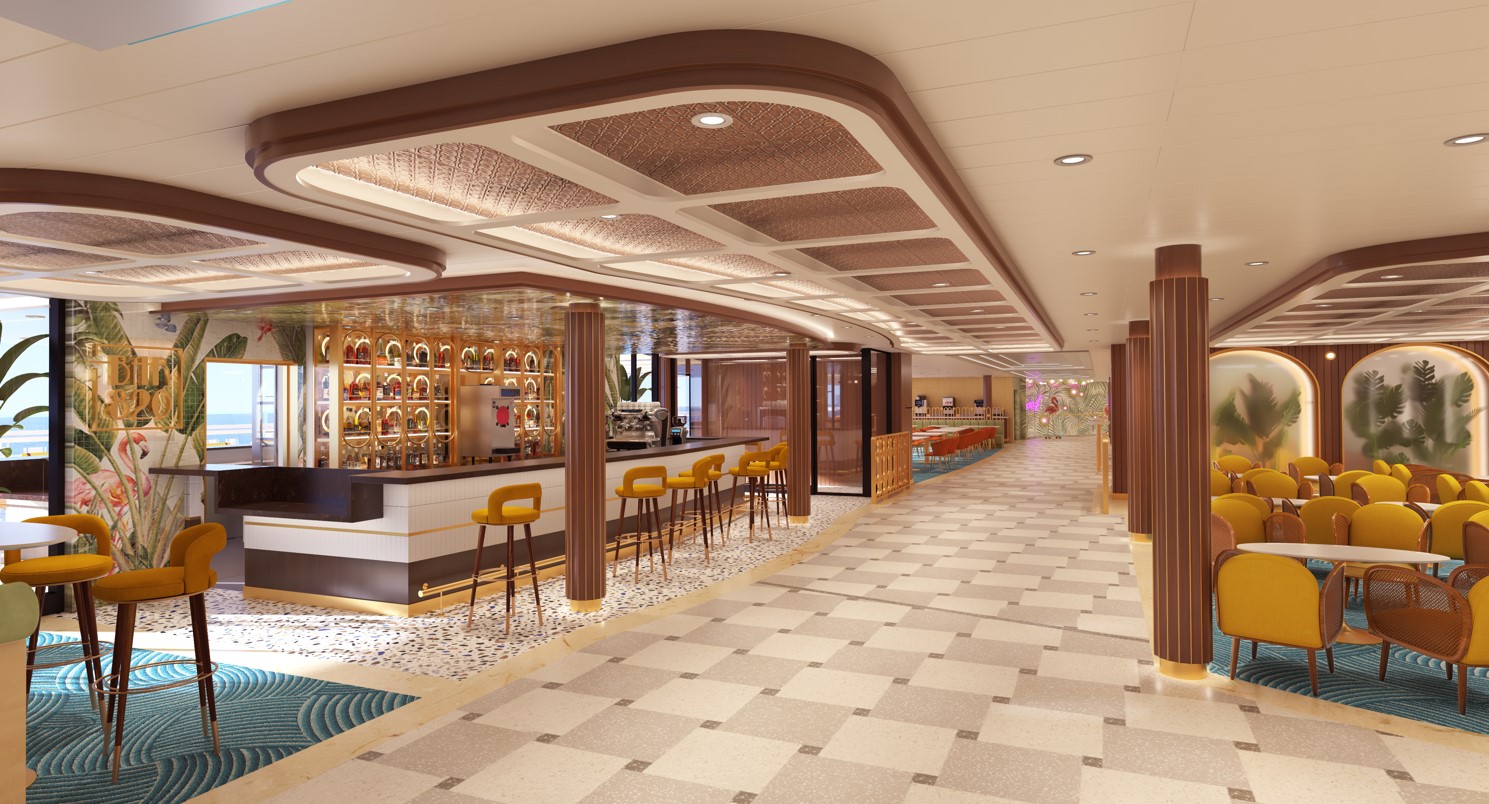 What’s happening in the world of cruise ships? Here’s a rundown of this week’s top cruise news.

We’ve had a glimpse of some new cruise ships, new deployments have been announced, and more ships are returning to service.

Miami-themed area during the carnival celebration

Carnival has unveiled what the new area will look like on Deck 8 of the Carnival Celebration cruise ship.

The area is called “820 Biscayne” and named after Carnival’s original headquarters address, 820 Biscayne will celebrate the culture, architectural styles and flavors of the hometown where the line was founded in 1972. .

The 820 Biscayne will include:

• Bar 820 – a half-indoor, half-outdoor, retro-inspired bar that will feature a “vintage cool” design with take-out Cuban and specialty coffees for early risers heading out for some morning sun, as well as tropical frozen foods inspired by Miami drinks and creative martinis day and night.

• Deco Deli – designed as a nod to Miami’s Art Deco mecca with colorful fonts and signage, the space will serve more than classic deli sandwiches with an expanded menu that also showcases Miami staples, including the Cubano (pork, ham, Swiss cheese and mustard), a croqueta sandwich (ham and cheese croqueta, minced ham and pickles) and pan con lechon (slow-cooked pulled pork, melted onion and mojo sauce) all on bread Cuban.

• Miami Slice – Continuing to provide customers with the 24-hour pizza they know and love, the ever-popular hangout will offer authentic, fresh-from-the-oven, hand-tossed slices of cheesy goodness in a contemporary setting and dynamic reminiscent of late-night restaurants on bustling Ocean Drive in Miami.

Passengers will find beautiful artwork and fun photo opportunities, like posing with flamingos on skateboards.

Carnival Celebration will be the second Carnival ship to be powered by a liquefied natural gas (LNG) propulsion system and will begin sailing in November 2022 from the new Cruise Terminal F in PortMiami.

Disney Cruise Line’s new cruise ship will be the signature lounge to give guests a princess makeover.

The Bibbidi Bobbidi Boutique will be accessible to children aged 3 to 12. where they can do their hair and makeup, and get different costumes to complete the look.

In addition to princesses and pirates, kids can also choose to become Captain Minnie Mouse and Captain Mickey Mouse for the first time.

There will also be a new Ariel costume for the first time, which fits the “Little Mermaid” stage show on board.

A new range of Australian cruises is available for booking for the 2023-2024 season.

Royal Caribbean has launched new sailings on three ships from below, including Ovation, Quantum and Enchantment of the Seas.

Quantum of the Seas – Cruise from Brisbane

Headlining Australia’s lineup is Quantum, which returns for an encore following its first summer season sailing from Brisbane in 2022. Holidaymakers can choose between 3-13 night cruises to explore Queensland’s stunning coastline, including including destinations such as Airlie Beach and Cairns, Queensland; or discover the untouched beauty of the South Pacific by visiting places like Port Vila, Vanuatu and Noumea, New Caledonia.

Ovation of the Seas – Cruise from Sydney

Ovation, one of the most technologically advanced vessels, will set sail for its fifth season in the region. Holidaymakers can choose from a mix of 20 cruises, including 9- to 11-night sailings that visit destinations along New Zealand’s rugged coastline like Milford Sound, Wellington and Bay of Islands. Customers can also choose from a range of 3-9 night Australia getaways to visit Hobart, Adelaide and Eden; as well as cruises to the islands of the South Pacific.

Enchantment of the Seas – Cruise from Sydney

Highlights of Enchantment’s inaugural season in Australia include new destinations for Royal Caribbean: Kangaroo Island and Gladstone, Australia. Vacationers can escape to the South Pacific on 8 to 11 night cruises and visit the Isle of Pines, Mare and Nouméa, in New Caledonia; Lifou, the Loyalty Islands and Port Vila in Vanuatu. A range of special cruises are also on deck, including an 11-night South Pacific and Fiji Christmas cruise, and longer 16- and 18-night sailings to locations along the Top End and the west coast of Australia, such as Darwin, Exmouth and Fremantle. Customers can combine both itineraries to enjoy a 34-night Australia and New Zealand adventure.

The Disney Magic arrived earlier this week as the first ship to visit Grand Cayman since the COVID-19 pandemic began.

Martyn Roper, Governor of the Cayman Islands, said: “Today marks the arrival of the first cruise ship to Grand Cayman in over two years, an important milestone for the Cayman tourism industry. Kudos to Minister Bryan and the Department of Tourism for their hard work in navigating the complexities of returning cruise tourism. »

“I am grateful for the opportunities and the return of livelihoods for many tourism workers who depend on this aspect of our tourism as we continue to gradually relax regulations and open our borders while living with Covid-19.”