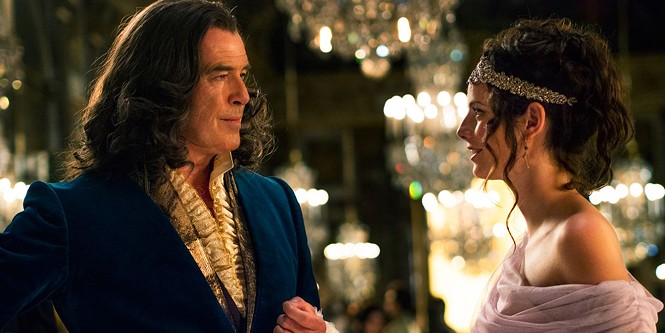 A fact-based drama with all the potential to be a stereotypical tale of female empowerment instead takes on a wistful tone built on the angst of uncertainty. In 2006 Kosovo, Fahrije Hoti (Yllka Gashi) is one of many women in a small village whose husbands were never found or returned after the 1999 war. Desperate for money, Fahrije decides to start a business making and selling the condiment ajvar at a local supermarket, going against society’s expectations of what a married woman should and shouldn’t do. A clumsier version of this story would have looked at Fahrije’s struggle against the system and the assumptions that only a cowardly woman would do such a thing. But writer/director Blerta Basholli delves into how Fahrije lives with lack of resolve, trying to raise her children and deal with her invalid stepfather’s stubborn refusal to believe his son might be dead. Gashi’s performance finds its power in his stoicism, making the moments when his emotion bursts all the more powerful. Although we are rooted for Fahrije to succeed as an entrepreneur, Hive focuses more on her finding a way to move on with her life. Available January 21 through the ParkCityFilm.org Virtual Cinema. (NR)

The King’s Daughter ***
This adaptation of Vonda McIntyre’s 1997 novel The Moon and the Sun announces its fairy-tale good faith from the start, from the literal storybook opening to the Julie Andrews narration – and the result is engrossing enough to make up for its more clunky components. In 1684, King Louis XIV (Pierce Brosnan) summons to Versailles the young Marie-Josèphe (Kaya Scodelario), his daughter brought up in the convent who is unaware of her own royal identity. This coincides with the king’s attempt to achieve immortality through a ritual involving the sacrifice of a captured mermaid (Fan Bingbing), a plan which Marie-Josephe ignores when she becomes attached to it. Naturally, there’s a romantic subplot involving Marie-Josephe’s attraction to a handsome sailor (Benjamin Walker), which doesn’t really have much time to develop beyond the proper PG-rated chaste smooches. Still, Scodelario is a satisfyingly fiery heroine, and he always remains watchable, thanks in large part to the interactions between Louis de Brosnan and William Hurt as counsellor/priest, including the king’s less-than-sincere daily confessions. It seems like such adventures are low-budget and low-stakes, but maybe it’s okay that not all fantasy stories aim for epic consequences, and can sometimes just be a “once upon a time” story. time”. Available January 21 in theaters. (PG)

The Pink Cloud ***1/2
The opening disclaimer that Brazilian writer/director Iuli Gerbase’s sci-fi drama was written in 2017 and shot in 2019 certainly gives this story of isolation a veneer of prescience, but it works because details, not just because of the metaphor we can now turn Him into. After what could have been just a one-night stand, Giovana (Renata de Lélis) and Yago (Eduardo Mendonça) find themselves trapped together when a toxic cloud blocks people around the world exactly where they are. , with no end in sight. Gerbase makes a few hand gestures about the logistics of how the post-cloud world works, but asking “why doesn’t everyone just wear hazmat suits” seems out of place. Instead, it’s a disturbing character study of how different people react differently to a crisis like this, how quickly it’s possible to adapt to a “new normal” ( in an excellent editing sequence), if it is possible to obtain too much comfortable with this new normal and the added desperation that can come after a brief moment of optimism. Giovana and Yago’s partnership of necessity goes through multiple compelling iterations, cast in the ubiquitous cloud pink hue and tuned to a terrific score by Caio Amon. You might consider the occasional sluggishness and repetitiveness a bug, or a feature of a world we know all too well. Available January 21 at Broadway Center Cinemas. (R)

Redemptive love ** 1/2
It’s an odd combination when a Christian-themed movie attempts to convey the courage and violence of an Old Testament story, so I guess credit is due for being as close to a hit as this . Director DJ Caruso and Francine Rivers adapt Rivers’ novel – itself a fictional historical take on the biblical story of Hosea – set in 1850 California, where simple farmer Michael (Tom Lewis) becomes convinced that her destiny is to save and marry Angel (Abigail Cowen), a prostitute serving the booming gold rush town nearby. Whether through flashbacks to Angel’s youth or the present day of the story, Caruso and Rivers don’t slow down the darker elements of the narrative (child sex trafficking, incest, vigilante justice ), but still with an eye for PG-13-appropriate showmanship like Angel’s long hair strategically covering her nudity and lots of magical photography. Cowen herself – an Amy Adams doppelganger – does an impressive job with a familiar “prostitute with a heart of gold” persona, even distracting with the number of times the plot has led her to make self-destructive choices by feeling of unworthiness. Unfortunately, she has to hold the entire romantic subplot, as Lewis brings little more than bland earnestness and a drawl that sounds like a Matthew McConaughey impression. It inevitably comes down to a climax where God comes along with a miracle or two on behalf of those who pray, albeit with a lot of suffering along the way. Available January 21 in theaters. (PG-13)

Too much intellectual curiosity – Not enough Fox News.