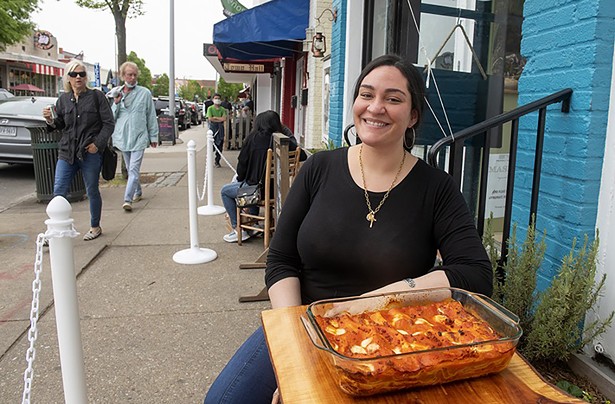 For the Love of Italian

Over the past year, Sprezza Cucina has brought Italian food pop-ups to Richmond that have shared a more diverse view of this country’s cuisine, gathering a cult following along the way. Now fans and newcomers alike can rejoice, as Angela Petruzzelli, founder, owner and chef of Sprezza Cucina, opens the first brick-and-mortar Sprezza store in November.

One of the main strengths of Petruzzelli’s pop-ups is their focus on a refreshing variety of dishes and ingredients found in the different regions of Italy. With much of Richmond’s current Italian offering centered on Italian-American classics, Sprezza has leaned into Italy’s rich biodiversity, serving pasta with crema di basilico, fennel salad and orange and cacio e pepe, as well as dishes such as his family’s signature lasagna, a fan favorite. For its next move, Petruzzelli’s traditional menu will draw inspiration from its own family roots in Italy by focusing on cuisine from Puglia, the heel of the so-called “Italian boot”.

Petruzzelli’s father hailed from an area near Bari, a port city on the Adriatic Sea where buildings of sun-bleached stone crowd the shore like teeth, all along the jagged cliffs that drop into the sea. Culinary traditions here are what Petruzzelli grew up in, and his new permanent space – located at 111 Virginia St. in Shockoe Slip, a property formerly occupied by Morton’s The Steakhouse – will allow him to introduce Richmond residents to a range of dishes from Puglia. who revel in the riches of the seaside, alongside a carefully selected menu of Puglia wines.

“There will be a lot of different types of seafood, especially when it comes to pasta,” says Petruzzelli. “I think people will see things they may not have seen before, which excites me enormously. Eventually I will try to incorporate pastries and other things from Puglia that you won’t find not necessarily in other parts of Italy, and which you certainly won’t find in Richmond.

A quick digression on cultural history: While it’s almost never a good idea to generalize, it’s worth the risk of saying that Italians, as a whole, are obsessed with their food and, more broadly, their food culture. . Today, as eating seasonally and sourcing local ingredients has become increasingly popular, it should be noted that one of Italy’s most recent contributions to food culture has been the movement “Slow Food”, a campaign started in the 1980s (launched in protest against the first McDonalds in Italy). In short, the movement revolves around the principles that food is ‘good’, ‘clean’ and ‘fair’ to the consumer, producer and the planet, while advocating an ‘adequate portion of sensual gourmet pleasures, consume slowly and for a long time”. enjoyment.”

As it sounds, it’s about choosing slow, eating slow, and living slow, in a way that forgoes binge eating and encourages appreciation for everything that brings you closer to your meal, from ingredients to people with who are you. Inside Sprezza, Petruzzelli’s food will be personal and echo the feelings of its origin in a way that goes beyond a particular sauce or pasta shape – although it has those too. .

“People can expect to enjoy really good food and have a really slow, sweet time with the people they love,” says Petruzzelli. “For me, it has to be about the food, and wine, and the conversation. It has to be about the whole experience and, for me, the experience has to be something that people take their time with. These will be foods that are in season and prepared with a lot of thought about where the ingredients come from. »

With this new venture, Petruzzelli is leapfrogging from a traveling pop-up kitchen at places like The Broken Tulip and Pizza Bones, to putting down roots in a sprawling 7,800 square foot space. For her, the change is a reflection of her continued embrace of a city that, since moving to Richmond from Miami in March 2020, has embraced her.

“There aren’t many places like Richmond where people will rally around small business like they do here, and it’s amazing to watch and experience honestly,” she adds. “This restaurant is a love story and it’s something I do for the people who support me. I wouldn’t have taken over this restaurant if it wasn’t for them and it wasn’t an act gratitude to my community.