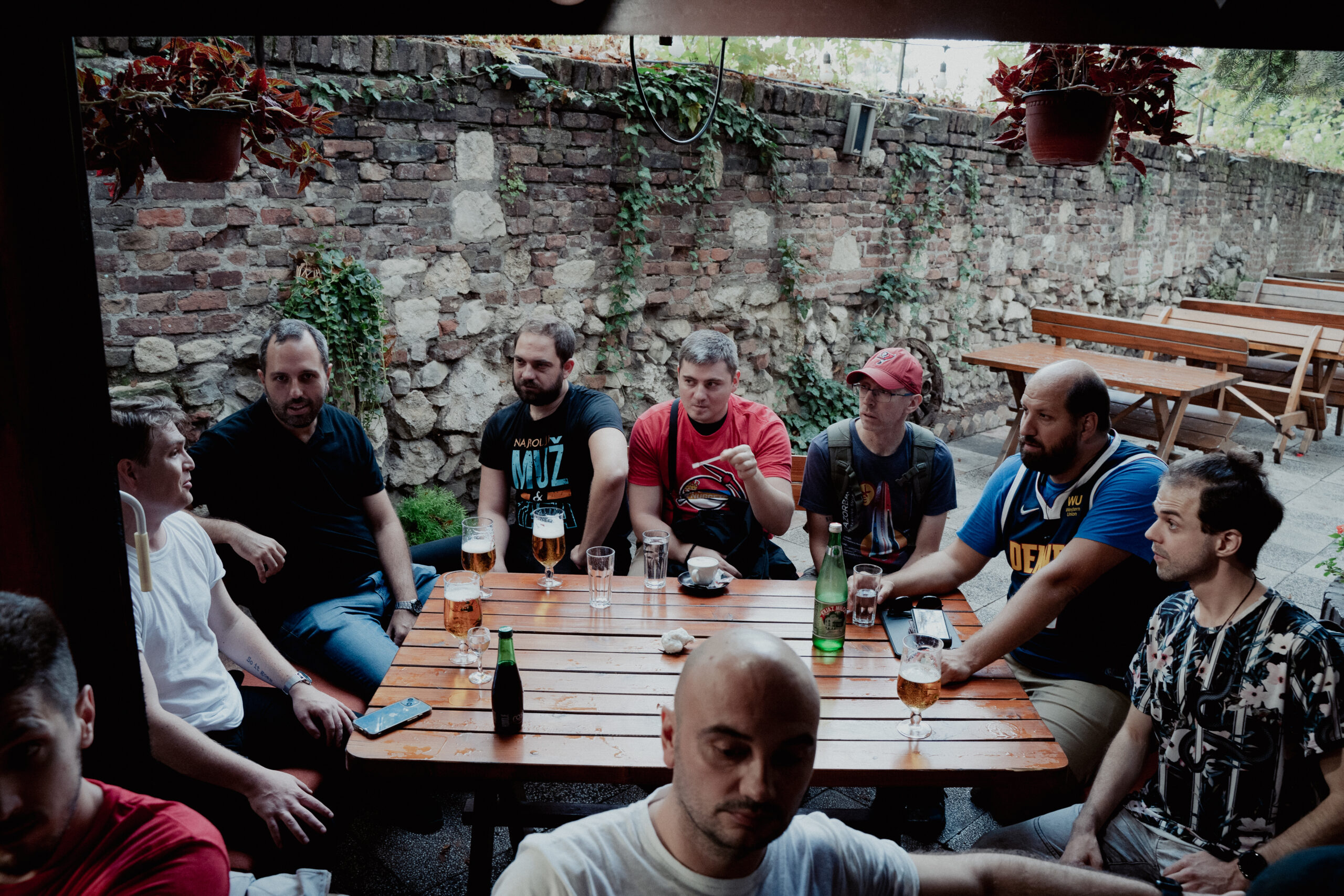 Day 2 in Serbia was…

Unforgettable. Incomparable. Lifestyle change. It’s hard to describe what happened here in Belgrade on Saturday night. Whatever I say, I won’t do it justice.

We organized a meeting in a local bar in Belgrade (Kafana Mali Kalemegdan) to watch the Serbia-Germany friendly match with DNVR and Nuggets fans. It rained for much of Saturday and we didn’t know how many people were going to show up. But then we walked up the hill and saw the crowds ahead. Then someone shouted “Mile High City, Baby!” We knew we were going to have a hell of a night from then on.

The next five (or six, or seven, who really knows) hours were amazing. It’s rare to feel such a close connection with so many different people, from all walks of life, all educations, all walks of life, all at once. But that’s what we had. There was a special bond between everyone at Kafana last night. People I had never met were suddenly like family. We talked, laughed, hugged and drank like we were brothers all night.

It’s crazy how not just a sport or a team but a player can unite a group from Denver with one from Serbia – halfway around the world. This is the power of Nikola Jokic. We are all in Serbia because of him. We want to better understand it and Serbian basketball by immersing ourselves in this culture. Last night at Kafana, surrounded by everyone, I really started to discover what we had come here for. While we are so eager to learn about this country and its culture, Serbs are just as eager to share. This is highly appreciated by our DNVR group.

It’s such a proud nation. Serbs are so proud of who they are as a people, what they have overcome and what they have been through. He still shapes them today. They are willful and confident. They are serious and get to the point quickly. They don’t bullshit you. They tell you straight, although I’m pretty sure someone told me very seriously last night that Serbia was in fact responsible for the discovery of the United States.

I met people who came from different countries to be at the meet-up. Someone drove over 10 hours to pick up a special mark from Rakija and bring it to us last night. Man, it’s a special feeling when there’s that kind of love in a room. It’s the kind of environment you never want to leave. It’s the kind of night you never want to end. This will probably be the highlight of the trip, and I can say that after spending 48 hours here.

I am so impressed with the basketball knowledge of this country. So many people I spoke with last night had some clever take on the Nuggets. I’ve always heard what a nation that lives and breathes sport, and it’s absolutely a fact after being here for two days. And the connection they had with DNVR was so meaningful.

These are Nuggets fans who stay up or wake up at 3 a.m. to watch Nuggets games and then stay up for another five hours to watch the entire DNVR post-game show. Many of the fans we met last night don’t miss a single game or show. Last night so many people remembered specific segments or moments from post-game shows over the years. Last night someone complimented me on a take I had on Gary Harris from a 2019 episode.

And it came after the — and this is not an exaggeration, this is not hyperbole — the best meal of my life.

We met the good people at Ambar, a one of a kind Balkan style restaurant in Belgrade, by Tim Connelly. It was an amazing experience. As our host Marko, who is another absolutely legendary character we met on this trip, explained to us, Serbian cuisine is generally very traditional. I’m talking big portions and everyone has their own meal. But Ambar is the first restaurant in the Balkans to go the small-plate route where sharing is encouraged. Marko says that at first the Serbs were hesitant to embrace the concept, but now they are more and more comfortable with it.

First, we started with a Rakija tasting and tasted three types of Rakija, plum, apricot and quince. Unlike how we tend to belittle Rakija on our post-game show, it’s a sipping drink. We also learned that you are supposed to drink Rakija from a Chokanche, it is a tall skinny glass and not a shot glass.

Then the food. We were treated to what I think was probably a seven course feast. The food kept coming. We started with meats and cheeses, Serbian cornbread, and too many types of spreads to count. Salads and dishes with pork, sausages, beef, pasta and potatoes then followed.

I felt something new and different during this meal. Everything that came out of Ambar’s kitchen was so good and so unique that there was this level of anticipation for each new dish that I had never felt before. The excitement that I was about to taste a dish I had never tried before was an incredibly cool feeling. And each time, what I ate did not disappoint at all.

It was a special experience. Marko walked us through each dish and gave us the backstory of everything we ate. It was a history lesson crossed with a cooking class. I really feel like I understand more about this culture and the Serbs after learning about their food.

Dinner at Ambar and our meeting at Kafana capped off a day in all time, which actually started in a podcast studio. Infinity Lighthouse hosted us in their building to film and record an episode of the DNVR Nuggets podcast. On the show, we were joined by Srdjan Radojevic, someone we are close to called the Zach Lowe of Serbia. We talked about Jokic, the Nuggets next season and European history, history. Srjdan has a great perspective. It’s a walking encyclopedia of Serbian hoops.

It was an unforgettable day. If we can top it while we’re on the road, I’d be blown away. But you never know. As I write this, we are on the road to Sombor. More to come tomorrow.