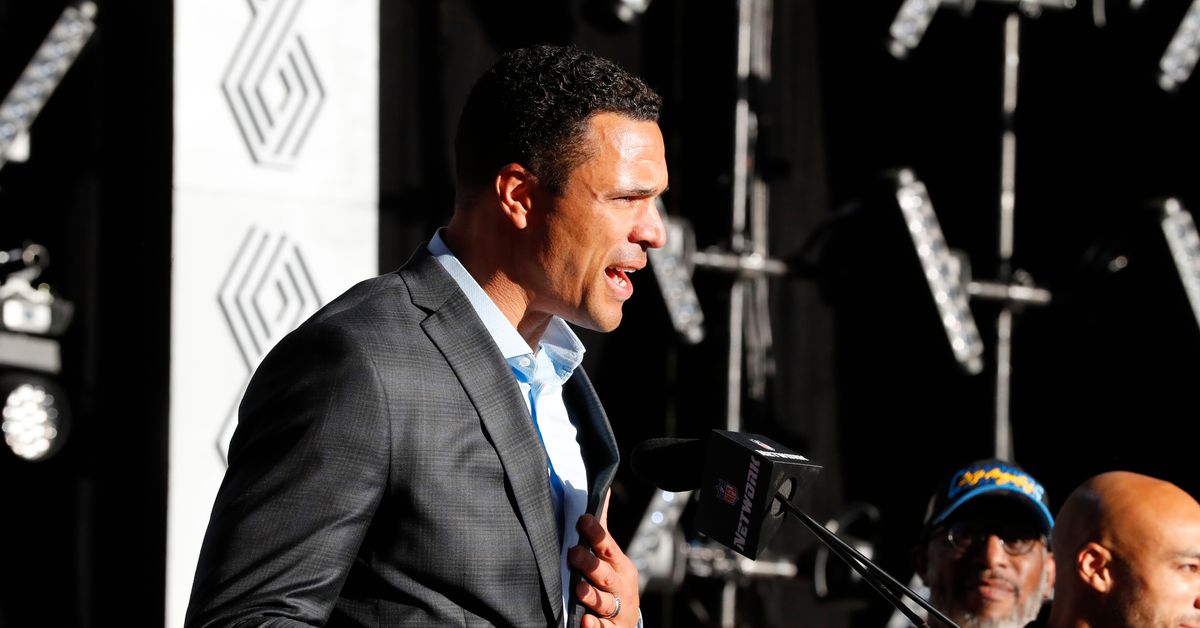 Welcome to our Arrowhead Pride 2022 NFL Draft Live Blog of the Day 2. Click here for everything you need to know about how to watch the draft. Bet on the draft at DraftKings Sportsbook.

This article will host updates regarding Kansas City Chiefs rumours, choice reactions, business updates, hot takes and more, while also serving as a thread for discussion in the comments. The Chiefs are currently picking twice in the second round – at No. 50 and No. 62. They are also expected to pick once in the third round – at No. 103.

Stay tuned to Arrowhead Pride for the latest leader move updates – and be sure to tune in too our arrowhead pride Draft Room Podcast which will be released shortly after the end of Round 3.

[5:35 p.m.] Rumor has it that there will be a race on receivers at the start of Day 2. George Pickens is by far the most talented of the available. I’m super interested to see how much his injury or bad maintenance worries could drag him down with his talent. (Ron Kopp Jr.)

[5:44 p.m.] I’m high on Arnold Ebiketie and David Ojabo as edge riders who can be legitimate transmission threats, double-digit sack potential. Completing Karlaftis with either of these guys would be a dream – even if Ojabo’s impact won’t begin until 2023 (Ron Kopp Jr.)

[5:52 p.m.] There are also some intriguing defensive backs on the board. Baylor safety Jalen Pitre drew comparisons to Honey Badger. On the other hand, if they like a cornerback on the board, could McDuffie be more of a safety? I think so (Ron Kopp Jr.)

[5:59 p.m] What’s up everyone! Let’s roll! Louis Riddick thinks the Chiefs can go up for a WR, and when he talks Chiefs, we listen… (Bryan Stewart)

[6:04 p.m] Keep mentioning Baltimore specifically as a team they might want to skip.. would probably be for Watson, Moore, Pierce or Pickens (Bryan Stewart)

[6:12 p.m.] Who do the commentators think will be the next big 2nd round WR like AJ Brown, DK Metcalf and Deebo Samuel? The Chiefs need this guy. (Bryan Stewart)

[6:17 p.m.] Logan Hall is someone I didn’t get excited about as a Chiefs draft pick. Feels like a bad diet. Tampa is a good place for him (Ron Kopp Jr.)

[6:17 p.m] Logan Hall is going to Tampa, I think he would be a great 5T but I’m sure playing alongside Vita Vea will help Hall a bit, a great landing spot. (Graff Heel)

[6:19 p.m.] Packers taking Christian Watson away. First WR on the board, and he’s one with a big advantage. (Ron Kopp Jr.)

[6:20 p.m] Rodgers finally has a gun! Watson has a huge advantage, but the No.12 demands and expects a lot. (Graff Heel)

[6:20 p.m.] Not my favorite WR who left tonight. Chefs can always get something better in my opinion. (Bryan Stewart)

[6:28 p.m.] Dang I really like Pitre. One could imagine it being such a fun piece for Spagnuolo to use as a dime. (Ron Kopp Jr.)

[6:32 p.m.] Ebiketie was the dream. I really think he could be a special rusher, even if he lacks in other areas of his game. It probably never happened anyway (Ron Kopp Jr.)

[6:39 p.m.] It gets deeper and deeper in the 2nd round with only one wide receiver caught. Chiefs are within striking distance (Ron Kopp Jr.)

[6:43 p.m] Who is more worth the risk they represent, George Pickens or David Ojabo? (Graff Heel)

[6:50 p.m] The Seahawks might regret not being a long-term QB, but Lock might get another shot. Boye Mafe and Kenneth Walker are good footballers. (Graf Heel)

[6:55 p.m] Lewis Cine and Andrew Booth for the Vikings, if both reach their potential, it’s a scary secondary. (Graf Heel)

[7:01 p.m.] Robinson is quite electric. I could see him being a fun player in the league, the Giants unfortunately aren’t the best place for that to happen. (Ron Kopp Jr.)

[7:03 p.m] John Metchie was an early favorite of mine but tore his ACL, the Texans could have the Round 2 steal. (Graff Heel)

[7:09 p.m.] Ojabo and Oweh going forward are going to be dynamic. (Bryan Stewart)

[7:11 p.m.] With Ojabo and Metchie gone, the Chiefs’ next choice should be a healthy body entering training camp. (Bryan Stewart)

[7:12 p.m.] Paschal was a favorite for Talon – but unlikely for Kansas City after taking Karlaftis last night. The wide receiver board still looks solid at 50. (Bryan Stewart)

[7:16 p.m] Paschal is a stallion, after choosing Karlaftis he was not going to be a leader, he is paired with Aidan Hutchinson, it is a difficult duo. (Graf heel)

[7:31 p.m.] If the Chiefs didn’t want to stay there, they’re not terribly in love with a remaining player. (Bryan Stewart)

[7:39 p.m.] Excellent trade from the chefs point of view. Add another pick to move back four spaces. (Bryan Stewart)

[7:52 p.m.] Skyy Moore is the Chiefs’ new receiver. Excellent complementary piece to MVS and Juju. Slot and Z which have a good change of direction (Ron Kopp Jr.)

[7:58 p.m] Skyy Moore seems like a very popular pick, I have to be honest I’m not thrilled, but if he can do it it will be with Kansas City. (Graff Heel)

[8:20 p.m.] The Chiefs are going with another very good defensive back in this draft. Cincinnati’s Bryan Cook will be a solid safety and reliable presence in the box. (Ron Kopp Jr.)

[8:25 p.m] I love this choice! Bryan Cook is a physical guy who can be a strength for Spags. (Graf heel)

[8:27 p.m.] The Chiefs secondary will be one of the best in the league by the end of the season. (Jared Sapp)

[8:35 p.m] Brian Asomoah ahead of Nakobe Dean is not something I would have predicted at all. (Graff Heel)

[8:46 p.m.] My head is spinning trying to do it all, but I have to get my Bryan Cook off the ground here. I really like the complementary styles of Reid and Cook. A real free security / strong security duo. It’s the long term duo, but in 2022 they have a very fun set of three safeties to work with. (Ron Kopp Jr.)

[8:49 p.m] Velus Jones was someone I mentioned as someone who could increase his stock with a strong combine performance. He just picked 71, that’s a huge boost from where he was expected at the start of the process. (Graff Heel)

[8:55 p.m.] The Falcons take Desmond Ridder, my QB1. I really think he’s the guy who can come in and win right away if he has a team around him that can do it. The Falcons aren’t that, but I still think Ridder could be a competent starter once they’re up for it. (Ron Kopp Jr.)

[9:01 p.m.] Bring me Nakobe Dean. Dean and Cook as replacements for Niemann and Sorensen would be amazing. (Ron Kopp Jr.)

[9:02 p.m] The Houston Texans have been sneakily warned so far. Hats off to them. (Graff Heel)

[9:10 p.m] The Colts’ waiting game pays off and they add their LT with Bernard Raimann. Another crush on Ron Kopp is off the charts. (Graff Heel)

[9:11 p.m.] Alex Wright was a Spags Edge possibility. A huge guy with experience at the three-point technique. Browns took him (Ron Kopp Jr.)

[9:22 p.m.] Falcons go DeAngelo Malone, an intriguing prospect who played wide receiver until his junior year of high school. He has the juice (Ron Kopp Jr.)

[9:27 p.m.] The Eagles stop the slide of the best player on my board: Nakobe Dean. When he’s healthy, he’s the best pure linebacker in his class for me. (Ron Kopp Jr.)

[9:41 p.m.] The skins on the wall mean everything. Some wonder about Bill, but how overblown would the reaction be if the Raiders had made the picks of the Patriots? (Jared Sapp)

[10:02 p.m] Matt Corral at Carolina. Don’t like the kid’s chances because another bad season and it will be a new coaching staff. (Bryan Stewart)

[10:07 p.m.] Colts taking Nick Cross, a safety thought similar to Cook’s in terms of where he would be drafted. Different players though. I love that chefs choose Cook (Ron Kopp Jr.)

[9:50 p.m] What do we think of Chiefs fans? My eyes are on Winfrey and Calvin Austin, though I wonder why Winfrey has fallen so far. (Bryan Stewart)

[10:36 p.m] The Chiefs go with linebacker, good value in Round 3 here with Wisconsin’s Leo Chenal. An excellent running tamper who can be the third base LB. (Graff Heel)

[10:43 p.m] This has been one of the most intriguing drafts in a while. I have the impression that many teams meet the needs. Only a few strokes “over there”. (Graff Heel)

How To Start Your Own Blog | Way of life