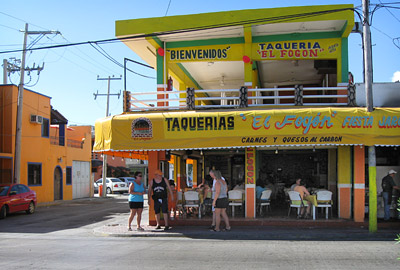 I was dying for a good taco. I had been on the Riviera Maya (the coastline south of Cancun) tourist brand for a few days and had been planted in seaside towns crowded with tourists where a legion of mediocre restaurants lined the sea like sentinels of B-quality culinary protecting tourists from the edible delights reserved for locals off the beaten track.

The last straw came when my wife Jessie and I picked the saltiest restaurant in Playa del Carmen and sat down, thinking the place might offer something more authentic than what we had been given. served so far.

I ordered grilled octopus and the waiter insisted that I go for the octopus dipped in bechamel sauce instead. It didn’t sound very good, but he insisted it was better. I agreed and after taking a few bites of this chewy slop I sent it back telling it that octopus should never be prepared this way. Even the chef poked his head out of the kitchen a few minutes later to find out who had returned this inedible gem. The next day I remembered reading in a travel magazine about a great taco restaurant in Playa called Los Carboncitos. “We have to find him,” I said. Playa del Carmen isn’t really known as Mexico’s culinary mecca, but still, I wasn’t going to leave Mexico without eating the food you just can’t find in New York City.

And so the journey began. The guy at the tourist information kiosk just shrugged when we asked where Los Carboncitos was. The woman in our hotel too. Shop workers, policemen and even fishermen had no idea what we were talking about. “Los Carboncitos? I said to a sunglasses salesman, my voice exuding a sort of despair that suggested I was lost. No chance. But the guy holding the little monkey on pedestrian Fifth Avenue had one consolation: “El Fogon,” he said. “This is where the locals go. He steered us inland and we walked and walked until palapa-topped hotels and restaurants turned into colorful, unadorned apartment buildings and houses, many of which sprang up in the 1990s when Playa del Carmen became Mexico’s fastest growing city (at one point, 100 families per month were moving there).

And then, finally, when we reached 30th Avenue, the garish yellow and green facade of El Fogon practically motioned for us to stop. The front room was dotted with a few tourists, but the crowd was mostly Mexican families, huge steaming metal plates of grilled meat at the center of their tables and containers of freshly made tortillas and red and green bottles of sauce. pungent. the supporting cast. We were in the right place. The mustached waiter put on a welcoming smile and soon enough a plate full of tacos arrived in front of us. The al pastor was tender with light hints of spice while the succulent chorizo ​​was so good that I wanted to drink the juice that had dripped onto the cardboard plate. These were some of the best tacos I had had in months. Maybe years. We ordered another tour and then headed back to the beach.

But we still wondered about the elusive Los Carboncitos. And the next day, during our final hours before we got to the airport, Jessie spotted him. “Look,” she said, gesturing to a side street just off Fifth Avenue, which is crowded with tourists. When I saw “Los Carboncitos” scrawled on the facade, it was as if a choir of angels sounded a harmonious note from heaven. We had found it. The holy grail of restaurants in Playa del Carmen, or at least it was in my head. We sat down and started ordering. Unfortunately, the food didn’t taste so divine. The tacos were commonplace: the chorizo ​​was dry and didn’t flow any fatty juice on my plate; the “fresh” fish tasted like it had been caught in multiple time zones (although the pozole wasn’t bad). Turns out Los Carboncitos was really just another of the tourist area restaurants we tried to avoid. But a naive travel writer with seemingly numb taste buds thought this was the place to go. It was a disappointing last meal and I hated going back to New York with this memory above everyone else. It was then that a light bulb lit above Jessie’s head. Let’s pack our bags and stop at El Fogon on the way to the airport.

When we walked in, backpacks bulging over our backs, the mustached waiter from the night before was there: “I had a feeling I would see you both again,” he said. “Two tacos al pastor and chorizo ​​are on the way.”