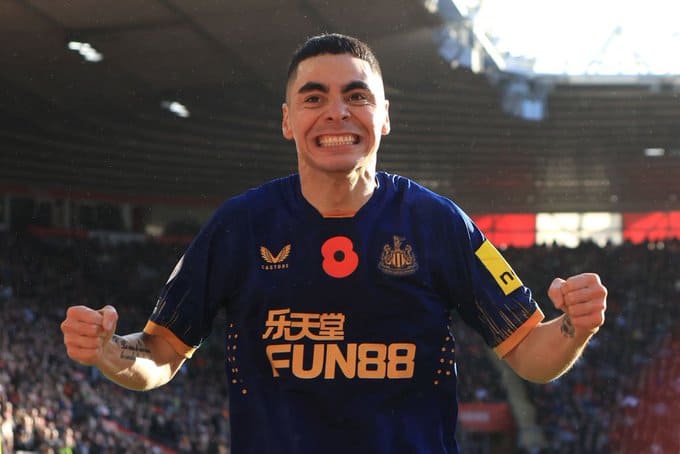 Another goal from Miguel Almiron put Newcastle 1-0 up at Southampton at half-time. The Saints put up an admirable fight but didn’t take a golden chance at the end of the first half.

The guys played in the usual 4-3-3 with Pope behind a back four of Trippier, Schar, Botman and Burn. The midfield consisted of Guimaraes, Longstaff and Willock. Almiron was on the right with Murphy on the left. Wilson led the attack.

It was a great start for the Saints who had most of the ball possession in the first leg. They asked a few questions with a few corners while forcing Pope into a diving save in the 10th minute.

Midway through the first half and the game remained competitive with Southampton continuing to play well. Newcastle had a few promising spells but only managed their first shot when Callum Wilson launched a wide effort in the 26th minute.

Newcastle opened the scoring in the 35th minute. Almiron picked up the ball deep to start the move. The ball was returned to Miggy as he raced into the box. Ainsley Maitland-Niles slid in to deny a pass. Almiron came out of the challenge attempt and passed Gavin Bazunu to make it 1-0.

The Magpies nearly doubled the lead in the 41st minute. Willock played a one-two before going for the signing. He ticked a cross into the box which Longstaff hung onto but his head floated above the crossbar.

The Saints came within centimeters of equalizing in added time. Stuart Armstrong played a pass in front of goal. Mohamed Elyounoussi clung to the ball but placed his shot just over the bar as Trippier rushed in an attempt to thwart the effort.

Trippier went lame after his challenge. He was able to complete the half but was noticeably hindered. His presence for the second half will be one to watch. Southampton rose to the challenge and this lead is far from assured.