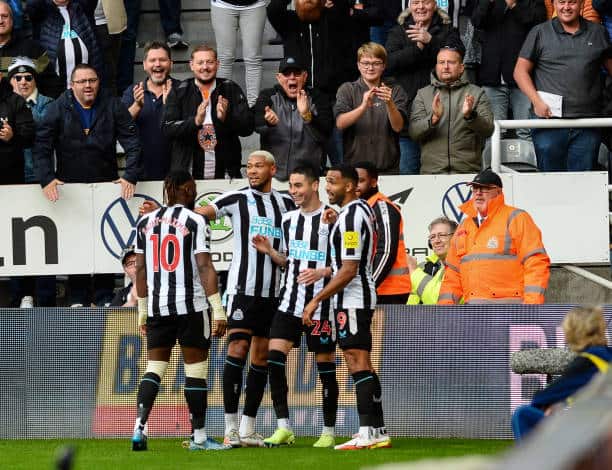 Since the arrival of Callum Wilson just over two years ago, Newcastle have been too dependent on the star striker for goals. Callum when fit is a goalscoring machine leading Newcastle over the past two seasons despite lengthy injury layoffs.

This season, the trend continued as Callum scored twice in his first three appearances before missing more than a month with a hamstring injury. On his return, he found the back of the net just after ten minutes at Fulham last weekend.

The goal put Callum back at the top of the scoring charts, with Alexander Isak also scoring twice in his first three matches. Miggy quickly caught Wilson with a brace later in the Fulham game.

Almiron’s late goal in the 5-1 win over Brentford yesterday was his 4th of the campaign. This equals his best league total as a magpie, which he achieved in the 2019-20 and 2020-21 campaigns.

The Paraguayan is also the first Newcastle player not named Callum Wilson to lead the club in goal since the striker’s arrival from Bournemouth. Here are our current goalscoring leaders:

Eddie Howe managed to find goals in other areas of the pitch, including Bruno Guimaraes who opened his season’s account with a magnificent brace yesterday. Bruno’s two goals put him at 7 in just 24 appearances. It’s a remarkable comeback for the midfielder who scored 10 goals in 155 first-team appearances before.

No other Magpie has beaten Bruno since signing last January. Almiron and Wilson both scored five goals in that span. Guimaraes paid tribute to Howe after yesterday’s game as the head coach made it a priority to get more goals from him, especially from his header.

The goals started pouring in after the international break with 9 from two games. Before the break, Newcastle had failed to find the back of the net in open play in two disappointing draws at St. James’ Park.

It is the first time Newcastle have scored 4 or more goals in consecutive league matches since beating Middlesbrough and Manchester United in September 2001. Those wins were sandwiched around a 4-1 win at Brentford in the League Cup thanks to a hat-trick from Craig Bellamy in overtime.

The past two weeks have been just as magical, but the focus must quickly return to current affairs. In 2001 we lost our next game 3-0 at West Ham. The target now is to get a result at Old Trafford next Sunday.