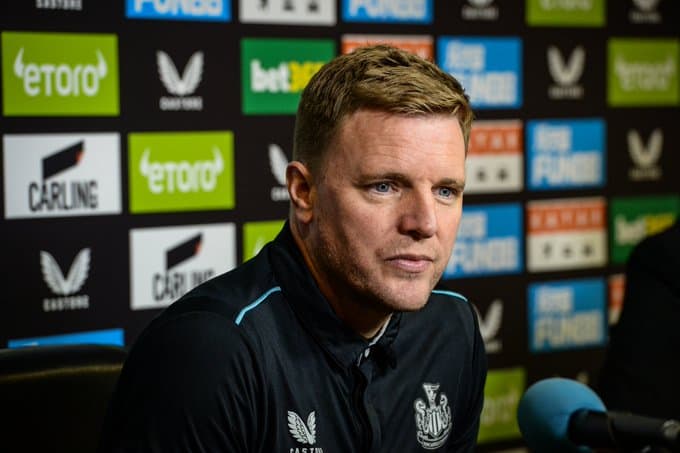 Eddie Howe gave his press conference ahead of tomorrow night’s match at Southampton. The boss has confirmed there are no new injury concerns following the win over Brighton.

Although there have been a few issues, it looks like everyone available over the weekend will be in contention tomorrow. Newcastle also released footage from yesterday’s training session which showed Matt Ritchie back with the group.

“We have no serious injuries. We had a few problems after the game against Brighton, but we had Matt Ritchie back in training, so that’s a very good thing.

Howe has kept pretty much the same team during our recent five-in-six game streak. The schedule allowed for a full week of preparation for most of these matches. That changes now with three matches in seven days.

This could be the time Howe rotates his squad with the likes of Sean Longstaff, Bruno Guimaraes and Jamaal Lascelles among others desperate for an opportunity. Howe addressed this topic saying:

“We will look to make the right decisions for the team.

“I think with the run we’ve had I’ve been hesitant to change things up because the team has been lacking pace for a long time so when you get it you want to try and improve not disrupt it. .

“That doesn’t mean I don’t believe in the players I don’t use, that’s the main thing. I believe in them and I believe they can all play a huge role in the future, but I have to just face the here and now.

The overall performance slumped against the Seagulls, but Newcastle managed to earn a key 2-1 win. Howe could again keep changes to a minimum tomorrow and then shake up the squad for the trip to Chelsea on Sunday.

One change fans might expect is the return of Allan Saint-Maximin to the starting XI. The Frenchman came on as a substitute against Brighton after missing the previous two matches with a calf injury.

Howe was hesitant when asked about Saint-Maximin as he feels he is still not in top form. The 24-year-old will certainly have a role at St Mary’s, but it may be another cameo, as Howe put it:

“He’s not 100% fit. He did one day of training in three weeks before the previous game, but we’re keen for him to get back to his best level.

“I think when he came on he did well and I thought he gave us a boost. We try to develop his physical condition.