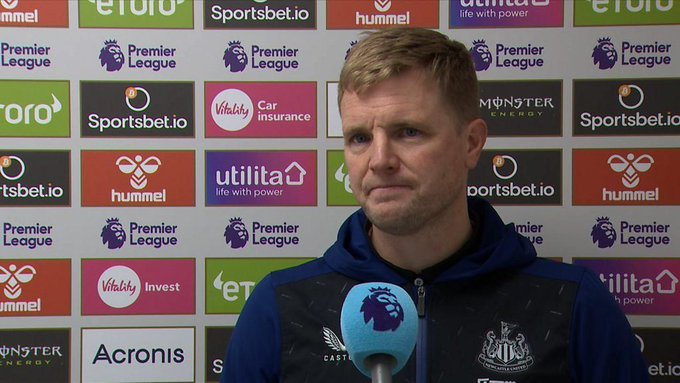 Newcastle moved ten points above the bottom three with the 2-1 win at Southampton tonight. The guys came back from an early deficit to claim their sixth win in seven matches and extend the unbeaten streak to nine games.

To top it off, three clubs below Newcastle in the standings suffered heavy defeats tonight. Leeds lost 3-0 at home to Aston Villa, Norwich lost 3-1 at home to our next opponents Chelsea, while Watford were beaten 4-0 by Wolves.

Here is an updated overview of the league table.

Although that looks very positive compared to Newcastle at the start of 2022, Eddie Howe is the type of manager who is solely focused on our next game. It happens in three days at Chelsea.

The Chronicle posted the following from the gaffer on our league standing after tonight’s win:

“It’s better than a few weeks ago. Nothing has changed since before the game. We know we still have tough matches and still work to do.

Southampton moved ahead of the first half when Stuart Armstrong scored from a corner in the 25th minute. Newcastle were able to get back level with a standout goal from Chris Wood just seven minutes later.

The striker opened his account with the superb header from a mouth-watering delivery from Jonjo Shelvey. It was a critical moment in the game as the guys managed to keep things level going into the second half.

Howe made a tactical change late in the first half which ended up paying off as Newcastle put on a great second-half performance. The guys rushed out of the gate securing the match winner with Bruno Guimaraes’ superb backheel in the 52nd minute.

After the match, Howe was happy with the result but felt the overall performance could have been better. Here is his take on tonight’s game:

“It’s a really tough place to come, especially when you’re one goal away and you’re not playing at your best.

“There were some very good individual performances among a team performance that probably won’t be our best. I felt we had to change things tactically.

“Martin [Dubravka] had to make some really good saves, but we weren’t under pressure. I thought we were sometimes a little wasteful with the ball, which is frustrating.

Newcastle missed Joelinton in the middle of the park as the Brazilian’s groin injury finally caught up with him. The 25-year-old was at St Mary’s to watch the game and could be in contention for Chelsea on Sunday.

Howe will have a decision to make after Guimaraes’ performance tonight. There could also be other changes with the fast turnaround. Emil Krafth was taken off late and Fabian Schar may have to rest.

The work continues and Howe will want a result at Stamford Bridge. Newcastle are close to meeting their safety targets, but Howe won’t rest until the last ball is kicked this season.