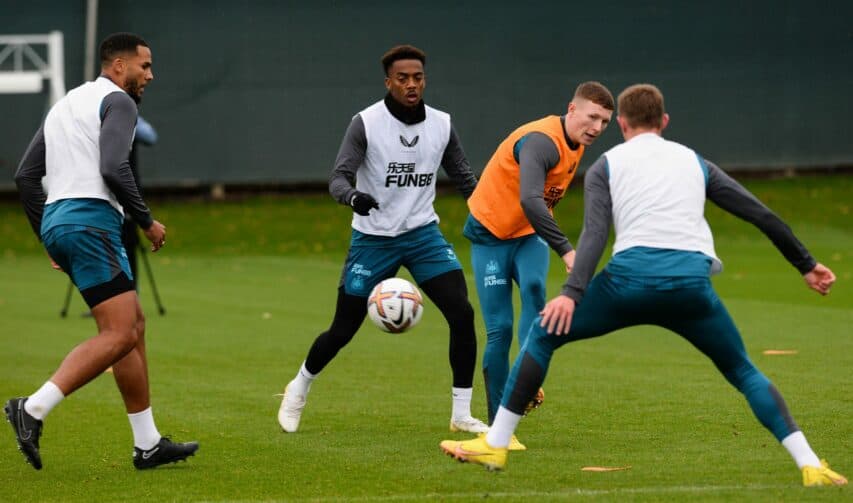 There was little evidence that Eddie Howe was set to receive a boost against Brentford on Saturday judging by Wednesday’s training footage. Neither Allan Saint-Maximin nor Alexander Isak featured in any of the 36 photos from today’s shoot.

The club kept things close to the vest in their recent ‘Toon In Training’ outing. The 60-70 frame days have been reduced lately and that may be at the behest of head coach Eddie Howe, who may want to keep his star strikers fit inside the building.

What we do know is that Allan Saint-Maximin returned to training last week while Alexander Isak was on the pitch shortly after his withdrawal from the Swedish team during the international break. Hopefully nothing has changed with either of their recoveries.

Saint-Maximin suffered a setback before the international break. He went to work with a specialist in Monaco and faced a late fitness test for the Fulham game. After the game, Howe said Allan was close but not quite ready for the Cottagers.

A few players with minor knocks have been spotted. Chris Wood and Joelinton participated in the session. While the two made the trip to London, they weren’t put at risk in the 4-1 win. Wood was nursing a rib injury while Joelinton missed a few weeks of training with a knee problem.

Eddie Howe also recruited a few youngsters to work with the first team. Midfielder Jay Turner-Cooke, right-back Joe Oliver and centre-back Jordan Hackett were all involved today and spotted in some photos.

Players not featured are Kieran Trippier, Javier Manquillo and Paul Dummett. Manquillo was left out of Fulham’s squad with Matt Targett at right-back late in the game.

Jonjo Shelvey has also not been spotted as he continues his comeback from hamstring surgery. He would be ahead of schedule. Karl Darlow, Matt Ritchie and Emil Krafth are all currently injured.