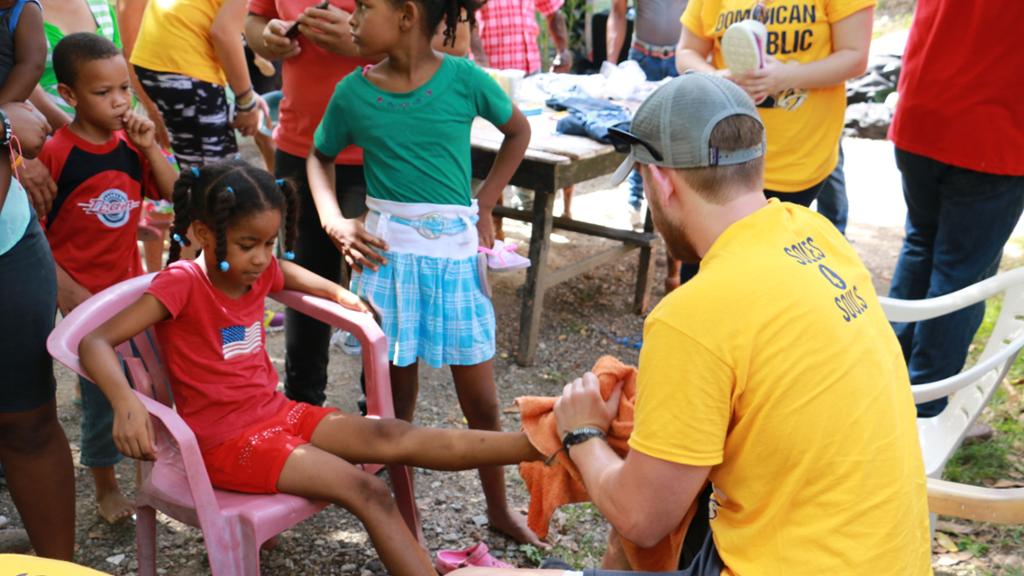 Note: Throughout the week, a group of Predators employees will blog about their adventures in the Dominican Republic as they distribute thousands of shoes with Soles4Souls.

After a hearty breakfast of tropical fruits and pan dulce, our Soles 4 Souls team sorted the shoes and toys for the three tours scheduled for today.

We were out at 8:30 am and headed to our first destination in Maimon, about 25 minutes west of where we are staying in Sosua. The tiny village – just off the main road – looked like the spitting image of a local storefront. Its residents sat patiently in rows of plastic picnic chairs awaiting our arrival. We prepared to serve 30 children, who quickly turned 70, but our team were in good spirits and eager to give to this gracious community. Our team divided into foot washing, shoe size searches and running stations to find the perfect pair for each child.

Our second stop was another community within the same village, a few miles up the road. We met in what appeared to be a community center, and the boys and girls were lined up with big smiles ready for their shoes. This 60-person visit turned into a cast of around 100, ensuring that every young child who arrives leaves with their own new pair of shoes.

At this point in the afternoon, we were ready to feast! And we did, at the famous Parada Jhoan. We crammed into the restaurant as we walked through two rows of grills and an outdoor kitchen, which is constantly grilling and frying whole fillets of red snapper and tilapia, freshly caught that morning. Our team divided plates of platanos and fries and each team member had their own filet to devour.

With a full stomach and after a quick downpour, we left for the last stop of the day, a Haitian community about 25 minutes from our meal. We were greeted with songs and chocolas (high fives), then walked the kids through a version of Head, Shoulders, Knees and Toes. The community ended up receiving nearly 130 pairs of shoes, which meant our team ended our first day of service by donating over 300 pairs of shoes.

It wouldn’t be a real trip to the Dominican Republic without a view of its famous Fortaleza San Felipe and the equally historic port founded by Christopher Columbus. The day was filled to the brim with moments to connect with our team and the locals. We can’t wait to see what adventures the rest of the week will bring us!

Day two of our service trip started with a quick breakfast before organizing and restocking the remaining shoe bags – all before 8.45am.

Our two service destinations were closer to Sosua (the town we stay in) but further inland, surrounded by farmland, mountains, and plenty of horses and cows. We got to our first stop at Caraballo a bit early which gave us time to play soccer and chalk draw with our future shoe recipients. Once the distribution launched, we sized and fitted 110 children with new pairs of shoes!

The distribution went well and allowed us to spend time with the kids afterwards. When we accepted the challenge of some locals for a futbol (football) match, it was on. The Souls4Soles team unfortunately failed, losing 2-1, but the laughs shared during the competition will be unforgettable. After a good game and high fives all around, we returned to the hotel for a lunch overlooking the water.

Thirty minutes later, we drove to the second distribution site at Poncho Mateo. We pulled up to the church and were immediately swarmed with crowds of children. After getting everyone in order, we distributed over 140 pairs of shoes to community members, from newborns to teens. That brings our total to over 550 pairs of shoes in just two days!

We ended this busy day by playing basketball, taking parentheses and getting to know the people who make these cities so special.

Our third day was spent taking full advantage of the natural beauty the Dominican Republic has to offer. With a 7am start to the day, we loaded the buses and headed to Muñoz for a buggy ride. Winding through the jungle, we took rocky roads to the waterfront.

Following our cow hunting guide on an ATV, we then ventured into the small village and up Mount Isabel de Torres. Arriving at a small outdoor villa surrounded by cashew, almond and avocado trees, the group was able to admire a picturesque look out over Puerto Plata, palm trees scattered across the mountain below.

We concluded our adventure with a stop to cool off in a swimming hole in the Cuma River. Our return to base showed the power of our vehicles as we crossed parts of the river and many puddles – to say we collected mud is an understatement.

After a brief lunch and a break at the hotel, we returned to Muñoz to spend a few hours playing with the children in the community. A poorer community in Puerto Plata, Muñoz is a predominantly Haitian population. Everywhere you looked, more kids came to join in the fun. From futbol and sack races to converting to human jungle gyms, these kids played relentlessly! The joy they showed as a result of our time with them was indescribable.

A week that has gone by too quickly has had one more adventure. After packing all the extra shoes and delivering them to our local missionary partner, we took a trip to the Teleferico, the only cable car in all of the Caribbean. Stretching 8,950 feet, this cable car goes to the top of Isabel de Torres Mountain, which rises to 2,565 feet. A beautiful ride up the mountain exposed the vastness of Puerto Plata below.

The spectacular attraction atop this mountain is the Christ the Redeemer statue which sits atop a former government outpost, originally built by President Trujillo in the 1950s to spot potential invaders. This statue of Christ the Redeemer is one of three in the world, the other two are located in the artist’s hometown, with the famous statue of Rio de Janeiro. An inspiring sight to see, this final leg of our journey provided a fitting opportunity to reflect on the work we have been able to do to help those in this world who need it most.

A small bag incident at the Puerto Plata airport and again in Miami didn’t slow us down. A truly life changing trip behind us, this group was ready to return to Smashville. Twelve hours, two flights and a slogan-filled dinner later, and the group of weary travelers landed at his home. Until next year: Give shoes, give love.